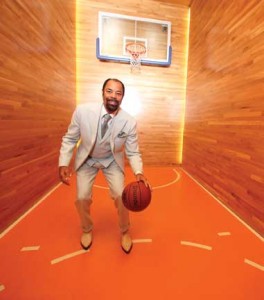 When Walt “Clydeâ€ Frazier retired from the NBA in 1980, he had been living between New York and St. Croix, where he had invested in property. “When my contract ended with the Knicks, I was looking forward to sailing into the sunset,â€ he jokes. In 1989, he became a licensed boat captain. “I was going to support myself by renting out properties and sailing tourists on my boat,â€ he says of his retirement plans. “I never envisioned my autograph being worth money, working with the Knicks [as a commentator], or being a partner in a restaurant.â€

When Frazier sat down last year with good friend, Knicks fan, and restaurateur Michael Weinstein, he had expanded his long- and short-term rental development in St. Croix (www.waltclydefrazier.com) to 12 units and a main house on five acres of land. But it took only two weeks for him to agree to enter into a dining partnership. In March 2012, Frazier and Ark Restaurant Corp., where Weinstein is CEO, opened Clyde Frazier’s Wine and Dine (www.arkrestaurants.com/clydefraziers.html) in New York City. “It took eight months to find a place and get it going,â€ the former point guard says of the 10,000-square-foot restaurant, bar, and lounge. “And it looks like Clyde. It’s my persona.â€

The length of an entire city block, Wine and Dine is a celebration of Frazier’s professional work and fashion style. There is even an enclosed mini basketball court situated next to the lounge. Floor-to-ceiling court action photos line the restaurant’s east wall. Columns are adorned with images of Frazier in his suits, and the ceiling is covered with pinstripe and plaid cutouts replicating his wardrobe. “The designers came to my house and filmed my shoes, ties, and suits–and this is the culmination.â€

Wine and Dine has become Frazier’s business focal point. He is often there, greeting and mingling with diners and guests. The varied menu offerings include salads, pastas, burgers, tacos, fajitas, and main courses such as blackened Scottish salmon with vanilla-bourbon butter and asparagus–one of Frazier’s favorites. Being disciplined about his diet and exercise (he has practiced yoga for more than 30 years) has helped the 67-year-old Frazier manage the demands of the restaurant business. “I was naÃ¯ve and didn’t know what to expect,â€ he says. He also admits to eyeing the possibility of expanding the brand. “Luck, common sense, and being prepared is how I played the game,â€ he offers. “It has also helped me to succeed in business.â€