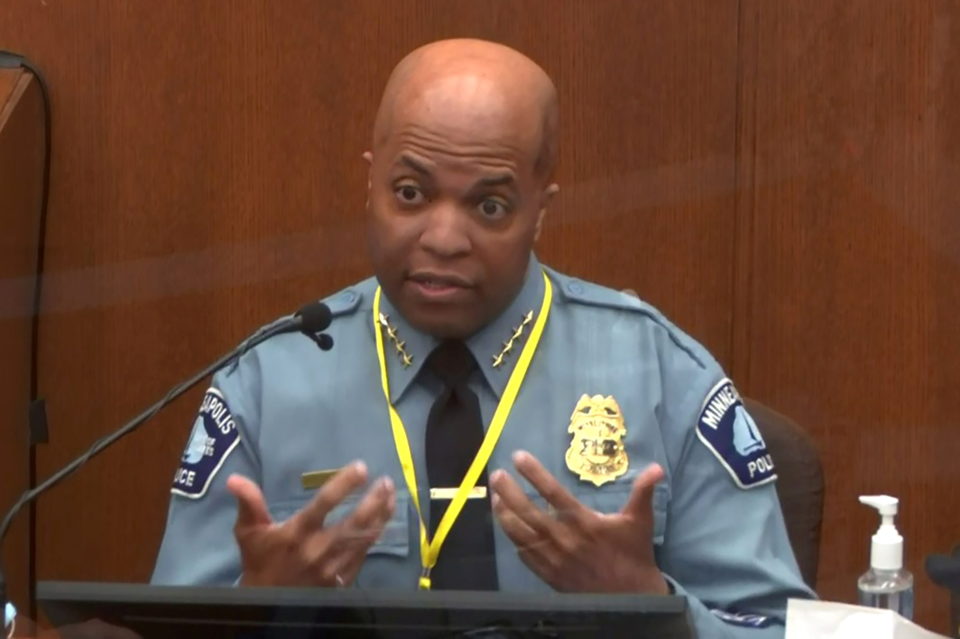 Reuters – Derek Chauvin broke Minneapolis police department rules and its ethics code governing the “sanctity of life” in his deadly arrest of George Floyd last May, the city’s police chief testified at the former officer’s murder trial on Monday.

“It’s not part of our training, and it is certainly not part of our ethics and our values,” Chief Medaria Arradondo told the jury as prosecutors sought to undermine a central plank of Chauvin’s defense.

Arradondo said he was alarmed when, a few hours after the arrest, he first saw a bystander’s video showing Chauvin, who is white, kneeling on the neck of Floyd, a 46-year-old handcuffed Black man, for more than nine minutes. The video sparked the resurgence of the Black Lives Matter movement

Chauvin has pleaded not guilty to murder and manslaughter charges. Prosecutors have called Arradondo and other police officers to weaken Chauvin’s defense that he did only what he was trained to do in his 19 years as a police officer.

Here are some important moments from the sixth day of testimony in Chauvin’s trial:

Arradondo, who in 2017 became the first Black person to lead the city’s police force, fired Chauvin and three other officers who were involved the day after Floyd’s death.

He also castigated Chauvin in a statement last year, saying: “This was murder — it wasn’t a lack of training.”

On Monday, Arradondo said it was unusual for police to take someone into custody where the alleged crime was as minor as in the case of Floyd, who was suspected of using a counterfeit $20 to buy cigarettes at the Cup Foods grocery store, a non-violent misdemeanor.

A prosecutor asked him to explain to the jury how police officers receive extensive training on how to use force and to reduce tensions.

“We are oftentimes the first face of government our community will see, and we will often meet them at their worst moments,” he told the jury when asked to describe the meaning of the badge the city’s roughly 700 sworn officers wear. “That has to count for something.”

Officers carry tourniquets and are trained how to use them to treat gunshot wounds, they are taught how to do chest compressions, and they are given naloxone inhalers that can be used to rapidly reverse an opioid overdose, Arradondo said.

He was asked to read aloud parts of the department’s code of ethics.

“It’s really about treating people with dignity and respect above all else,” he told the jury.

Chauvin did not follow his training in several different ways, Arradondo said. Chauvin used too much pressure on Floyd’s neck, Arradondo said, pointing to police training that he said emphasized the “sanctity of life.”

Chauvin also did not “de-escalate” the situation even as Floyd fell unconscious, and he did not provide the mandated first aid to a dying Floyd, Arradondo said.

In cross-examination, Eric Nelson, Chauvin’s lead lawyer, began with getting Arradondo to say it had been “many years” since he himself had made an arrest.

“I’m not trying to be dismissive,” Nelson said. He also had Arradondo agree with him that a police officer’s use of force is often “not attractive.”

Two paramedics who brought Floyd to the Hennepin County Medical Center after his arrest on May 25, 2020 told Dr. Bradford Langenfeld they had been trying to restart Floyd’s heart for about 30 minutes without success.

Langenfeld, an emergency physician, testified he took over Floyd’s care. Asked by prosecutor Jerry Blackwell if the paramedics indicated that they suspected a drug overdose or heart attack, Langenfeld said they did not, indicating only that Floyd’s heart had stopped beating and that there may have been a delay in starting resuscitation efforts.

“It’s well known that any amount of time that a patient spends in cardiac arrest without immediate CPR markedly decreases the chance of a good outcome,” he told the jury. Medical tests led Langenfeld to think it was unlikely that Floyd suffered a heart attack, he told the jury. The most likely explanation, the doctor said, was asphyxia.

Videos of Floyd’s arrest show that Chauvin kept his knee on Floyd’s neck for more than three minutes after Floyd appeared to have stopped breathing, and none of the police officers at the scene attempted to give Floyd first-aid care.

Nelson, Chauvin’s lawyer, asked Langenfeld whether fentanyl could also lead to the low oxygen and high carbon dioxide levels in Floyd’s blood. Langenfeld agreed it could. Floyd’s girlfriend testified last week that Floyd was addicted to opioids. A medical examiner who ruled Floyd’s death a homicide at the hands of police noted there was fentanyl in Chauvin’s blood at autopsy.

“Simply because someone has a history of chronic opioid abuse, does that mean fentanyl can’t kill them?” Nelson asked Langenfeld.

“No,” the doctor replied.

The two paramedics testified last week, saying that Floyd appeared already to be dead when they arrived and moved Chauvin off his neck.

Floyd was declared dead at 9:25 p.m., about 30 minutes after he arrived at the hospital and less than 90 minutes after police arrived outside the Cup Foods grocery store to arrest Floyd on suspicion of his using a fake $20 bill to buy cigarettes.