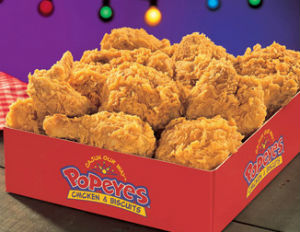 A long connection with the Louisiana chicken chain Popeyes and the cartoon character of the same name is finally over.

King Features, a division of the Hearst Corp., owns iconic characters such as Betty Boop and Spiderman. The chain was only using the character in international markets, and terms of the settlement were not disclosed.

“For over 35 years AFC and King Features have had a mutually beneficial licensing agreement that has led to immense growth of our businesses,” T.R. Shepard, president of King Features Syndicate, said in a statement. “I am happy that Popeye the character has been so instrumental to Popeyes the restaurant chain, and we wish them continued success in the future.”

No word on if Olyve Oyl also got the boot.