Preparing for the Future 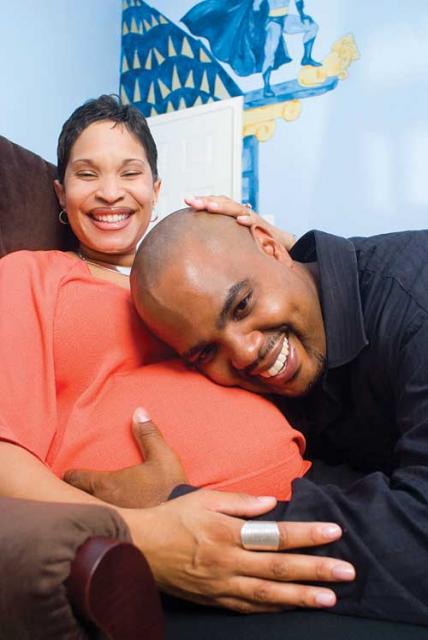 When Jason and Carol Wooden married in October 2007, they pledged to remain faithful not only in love, but also financial matters. In order to start married life free of revolving debt they paid off $14,000 in credit card debt and $5,000 in student loan debt before tying the knot. “It took one year to clear the debt. It was a burden lifted off of our shoulders,â€ says Carol, an electrical engineer.
The couple is especially careful about how they manage money because they’re expecting their first child. (As of this writing, Carol is due to give birth in a few weeks.) Jason and Carol, both 30, cut back on unnecessary spending and only use credit cards if they can pay off the balance within two weeks. “I’m a pretty simple guy. I don’t buy a lot of clothes or things that I don’t need, so that helps us stay on budget,â€ says Jason, a high school guidance counselor. In addition, the couple holds monthly meetings to review their budget and make necessary adjustments.
Thus far, the Woodens’ plan has proved successful. Jason and Carol have stashed $28,000 in their emergency savings account, and recently opened another account for costs associated with their soon-to-arrive baby. They also own two rental properties (one of which is paid in full) and over the last two years, the couple has taken their relationship to the next level–with a profitable business partnership. In 2007, the Woodens opened JC Bartending L.L.C., a mobile bartending service that utilizes certified bartenders for weddings, private parties, and corporate events. Revenues for 2008 were $16,000.
As if a new business and a new baby weren’t enough, Jason and Carol have set an ambitious goal for themselves–they want to stop working at their 9-to-5 jobs by the time they reach 45, and pursue their bartending business. With their goal just 15 years away, they have no time to waste.
Carol, whose 401(k) lost 18% since the economic downturn, says she is not afraid of the risk that comes with investing in the stock market.Â  Jason, however, has been a bit hesitant and just recently started investing in a money market fund. “I don’t like risk. I tend to shy away from it,â€ says Jason. Carol contributes $15,200 annually to her 401(k) and receives a match of 100% up to the first 4% that she contributes. Jason participates in a 403(b) plan and contributes about $200 a month. His employer does not offer a match.
“We want to invest and we want to grow multiple streams of income, so that we can retire early,â€ says Carol. In the meantime, the Woodens are seeking a financial plan that will help them grow and protect assets to pass on to their growing family.