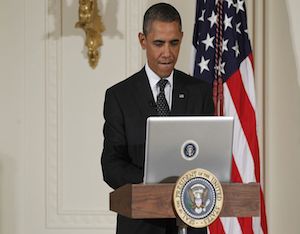 For those who don’t know, “net neutrality” refers to the principle that ISP (Internet Service Providers) and governments should treat all data on the Internet equally, not discriminating or charging differentially by user, content, site, platform, application, type of attached equipment, or mode of communication.

Obama, asking the FCC to set the “strongest possible rules” to protect net neutrality, cut a one-minute-plus video to outline his goals and plans. With Obama coming out in favor of the FCC re-regulating broadband lines under rules written for phone networks, it means that companies like T-Mobile, Verizon, AT&T and Sprint can not charge you individually for data services they offer.

The president’s support is a major win for lovers of a free Internet and Internet activists. The White House released Obama’s net neutrality proposal Monday morning to the masses and quickly the subject began trending. Obama was careful to note that the FCC is an independent agency that has the power to do what it wants, which should give the FCC and Chairman Tom Wheeler some leeway when adopting new rules over Internet lines.

With Obama urging the FCC to prohibit “paid prioritization,” which are deals in which content providers would pay Internet companies to ensure smooth delivery of traffic, it seems that the president is calling for the Internet to be used as a consumer utility.

Watch President Obama champion the freedom of the Internet for innovators and creatives below:

You can read President Obama’s full statement about net neutrality by clicking here.