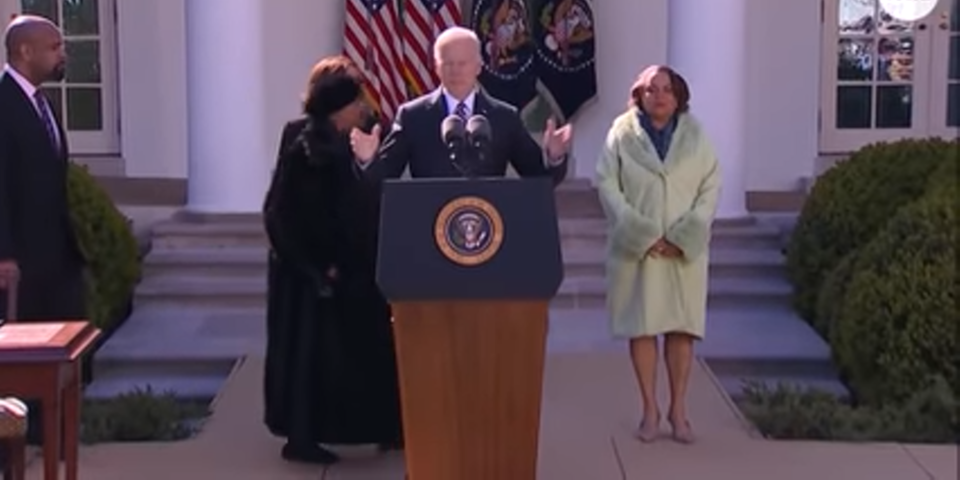 President Biden on Tuesday signed a bill making lynching a federal crime, for the first time explicitly criminalizing an act that had come to symbolize the grim history of racism in the United States. (Image: Screenshot)

President Joe Biden signed the Emmett Till anti-lynching Bill into law Tuesday, ending an effort that took more than 100 years to complete.

The bill criminalizes an act that has long symbolized racism against Black people in the U.S. The bill itself is named after Till,  who was tortured, beaten, and hung after Carolyn Bryant accused him of grabbing her, verbally threatening her, and at whistling her. Years later, she recanted the story.

The New York Times reports shortly after signing the bill into law, Biden noted more than 4,400 Black men and women were lynched between 1877 and 1950.

“Lynching was pure terror to enforce the lie that not everyone, not everyone belongs in America, not everyone is created equal,” Biden added, speaking to civil rights leaders and others in the Rose Garden of the White House.

Black Americans have fought for generations to specifically outlaw lynching. The bill, which makes lynching a federal hate crime punishable by up to 30 years in prison, was passed by the House In February and the Senate without opposition Monday.

Anti-lynching legislation was first introduced in 1900 but was repeatedly blocked by Southern politicians during the Jim Crow era and as an intimidation act to keep Black people from voting and pushing for civil rights.

Lawmakers failed to pass the bill more than 200 times, something the Senate formally apologized for in 2005, but still took another 17 years to pass.

The bill was sponsored by Vice President Kamala Harris when she was still in the Senate and Sen. Cory Booker (D-NJ.). During the ceremony, Harris also thanked Sen. Tim Scott (R-SC) and Rep. Bobby Rush (D-IL).

Both Biden and Harris also gave credit to Ida B. Wells, a Black journalist who fought lynching in the late 1800s and early 1900s and became a founding member of the National Association for the Advancement of Colored People (NAACP). Michelle Duster, the great-granddaughter of Wells, spoke at the ceremony detailing how hard her great-grandmother worked to make lynching illegal.

“She carefully chronicled names, dates, locations, and excuses used to justify lynchings. She wrote articles and pamphlets and gave speeches about the atrocities,” Duster said. “Despite losing everything, she continued to speak out across this country and Britain about the violence and terror of lynching.”