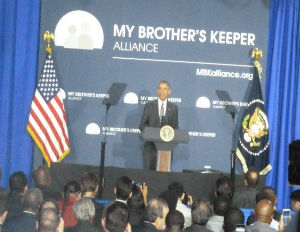 On the campus of Lehman College in the Bronx, President Barack Obama provided heartfelt remarks at an event that marked the launch of a new, independent nonprofit, My Brother’s Keeper Alliance. Leading the new organization is Joe Echevarria, a Bronx, New York, native and former CEO of Deloitte, the accounting firm. The MBK Alliance is a consortium of businesses in the private sector that intend to work at solving obstacles to the success of boys and young men of color.

In a roomful of luminaries that included Valerie Jarrett, David Banks, Geoffrey Canada, John Rogers, Alonzo Mourning, and Al Sharpton, as well as many student participants in My Brother’s Keeper, the president spoke movingly of his own background and of how there wasn’t much difference between the adolescent version of himself and many young men of color who may feel that their future is dim.

He also spoke of the recent unrest in Baltimore, and of similar scenes of frustration and protest that had erupted in Ferguson, Missouri; New York, and other locales after unarmed black men had been killed by police. He connected the dots between the frustrations in those communities and the substandard schools, lack of job opportunity, and lack of mentorship and skills training many there have experienced. “We’re asking the police to contain and control problems that we ourselves have been unwilling to invest in and solve, ” he said. “That’s not fair to the communities, and it’s not fair to the police.â€