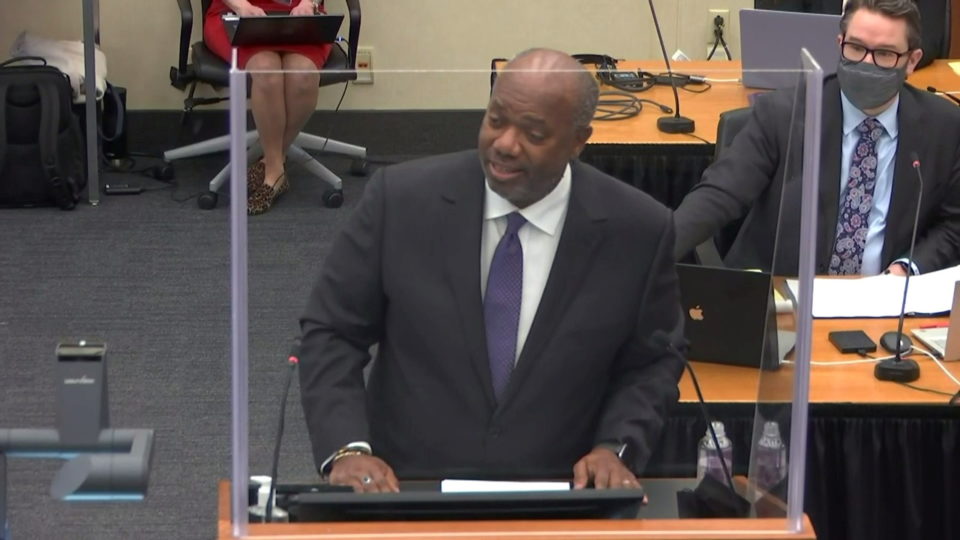 (Reuters) -Former Minneapolis policeman Derek Chauvin squeezed the life out of George Floyd while joining other officers in arresting him last May, a prosecutor told jurors in his opening statement at Chauvin’s murder trial in a heavily fortified courthouse on Monday.

Jerry Blackwell, a prosecutor with the Minnesota attorney general’s office, told jurors that officers who wear the Minneapolis police badge pledge to never use “unnecessary force or violence.”

“You will learn that on May 25, Mr. Derek Chauvin betrayed this badge when he used excessive and unreasonable force upon the body of George Floyd,” said Blackwell, who addressed the jury for just shy of an hour.

He displayed a still image from a bystander’s cellphone video of Chauvin, who his white, with his knee on the neck of Floyd, a 46-year-old Black man in handcuffs, saying it showed Chauvin “grinding and crushing him until the very breath — no, ladies and gentlemen — the very life was squeezed out of him.”

Floyd’s death ignited a global protest movement over police brutality against Black people. In the preceding two weeks of jury selection, many jurors told Hennepin County District Judge Peter Cahill and the lawyers on each side that they recognized the scrutiny their deliberations would come under, not least by those who view the trial as a reckoning for how Black people are policed in the United States.

“It’s been a long time coming,” a gospel choir sang on Sunday evening at a euphoric prayer service attended by Floyd’s relatives at a church a few blocks east of the deadly arrest. “But I know a change is gonna come.”

Philonise Floyd, a brother of George Floyd, said before the service began that he had faith that Chauvin would be convicted.

“The video is the proof,” he said.

‘NOT ATTRACTIVE BUT NECESSARY’ FORCE

Prosecutors played the most widely seen bystander video to jurors on Monday. Chauvin, dressed in a gray suit, a blue face mask and a blue shirt and tie, took pages of notes on a yellow legal pad as the dying moans of Floyd and the yelling of horrified onlookers filled the courtroom.

Chauvin, 45, has pleaded not guilty to second-degree murder, third-degree murder and second-degree manslaughter, with his lawyers arguing that he followed his training and that the main cause of Floyd’s death, which the county examiner ruled a homicide, was a drug overdose. He faces up to 40 years in prison if convicted on the most serious charge. The Minneapolis Police Department fired Chauvin and the three other officers involved the day after the arrest.

Defense lawyer Nelson used his opening statement to describe Floyd’s drug use and a chaotic scene during the arrest, saying the screaming of bystanders ended up “causing the officers to divert their attention from the care of Mr. Floyd.”

“Derek Chauvin did exactly what he was trained to do over the course of his 19 year career,” Nelson told the jury. “The use of force is not attractive but it is a necessary component of policing.”

The courtroom in a tower in downtown Minneapolis was ringed with concrete barriers, barbed wire and soldiers from the state’s National Guard. For blocks around, businesses are closed and windows boarded up, fearing a repeat of the arson and other property damage that occurred after Floyd’s death.

Less than three miles away, residents maintain a vigil at the intersection where Chauvin kept his knee on a handcuffed Floyd’s neck for about 9 minutes as Floyd uses his final breaths to plead for his life. Chauvin and three other officers were arresting Floyd on suspicion of passing a fake $20 bill at the Cup Foods grocery store nearby.

Four sets of barricades block police from coming to the intersection, now called George Floyd Square, which is filled with flowers, posters, murals and other tributes to Floyd.

The jury, including three alternates, is made up of six white women, three white men, three Black men, one Black woman and two multiracial women, according to court records.

Legal experts have noted that U.S. police officers have almost never been found criminally liable for killing a citizen. Chauvin’s lawyers have said they will try to convince the jury that the fentanyl, an opioid painkiller, found in Floyd’s blood by the medical examiner played a bigger role in killing Floyd than the officer’s restraint.

Rev. Al Sharpton, the civil rights activist who joined the Floyd family at Sunday’s service, echoed prosecutors in calling this an “attempt to smear his name.”

Tiffany Jeffers, a former Maryland prosecutor and a Georgetown law professor, said she saw the defense’s case as an uphill battle in part because of the widely seen video. All members of the jury have said they already saw at least snippets of it.

“This video is just so powerful,” Jeffers said.