Reframing the Narrative Around Black Men 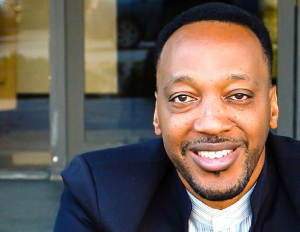 Which of the following statements is false?

Both the top and bottom statements are true; the one in the center? False.

[Related: Hilton Worldwide Teams Up With Black Enterprise to Celebrate Black Men in Advertising and Marketing ]

If you know who Trabian Shorters is, you probably already knew which statements were true and which was false. Shorters, co-author (with former NAACP president Ben Jealous, now a partner at Kapor Capital) of The New York Times best-seller, Reach: 40 Black Men Speak on Living, Leading, and Succeeding, founded and leads the national community organization that is changing the American narrative about black men. Through the BMe Community–whose network has grown to more than 35,000 community builders since it launched in 2013–Shorters is reframing how America sees and perceives black men. His organization locates black men who are already effecting significant positive change in their communities–and then supports them with financing, networking, and asset development resources.

In other words, Shorters is a revolutionary.

But, as they say, that’s not all folks. In 2015, Shorters was selected to be a Pahara-Aspen Fellow, the prestigious, invitation-only two-year program of the Aspen Institute, the educational and policy studies organization. Although not an educator himself, Shorters sees schools as essential to community building. He is excited to be part of the fellowship and eager to learn from the other fellows.

“We can have an America that values all of its people,â€ Shorters says, sounding like the visionary he is. “I was chosen for the fellowship because our articulation of the new narrative resonates with educators.â€

The New Narrative
With 26 communities across the U.S., BMe supports community and economic development and civic engagement. Shorters has found black men across the country who are not only highly engaged in their communities, but informed as well. These men are hardly the “face of America’s fears and woes,” as Shorters puts it, although not all in the network are black–or male. About 40% are non-black. “We do not build a network based on birth characteristics,â€ says Shorters.

“Black men are assets,â€ Shorters declares. “They are doing things to make their cities strong. They lead the country in military service–so they are patriots, they are our country’s defenders. The highest rate of increase in entrepreneurship is among black men.â€

Shorters is convinced that now is the moment for re-framing the narrative because of the nation’s diversity. “The millennial generation is the most diverse. The old racial narrative is no longer supported by the demographics.â€

Shorters observes how millennials now drive the media conversation, and how print and mainstream media is forced to cover what millennials discuss on Twitter and other social platforms. Of course, they are also driving elections: Shorters notes that the majority of millennials voted for Barack Obama.

Check out the video of Shorters below and learn more about the work of BMe Community at www.BMECommunity.org.