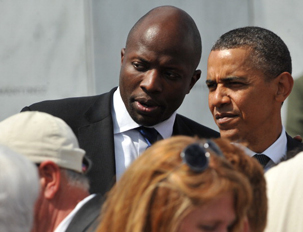 After the 2008 presidential win, Reggie Love was known publicly as President Obama’s “body man,” with every picture of Obama showing Love just two steps behind him.

Having worked for Obama since 2006, the Duke University graduate started his career in the mailroom during Obama’s senator days after trying out for two NFL teams and having no success.

In 2011, Love left his position as Obama’s personal aide to pursue an MBA degree from University of Pennsylvania’s Wharton School. Following his exit from the position, Love published a memoir titled Power Forward: My Presidential Education, which gave insight into his time on the Obama administration.

Recently, the 34-year-old and vice president at Ron Transatlantic Advisors, opened up to Harvard Business Review about the lessons he learned while working for Obama and how his former position has helped him to succeed in his career today.

Some young people might have bristled as some of the menial tasks your job required. Why is that the wrong attitude?

I didn’t look at the job as being about me. I looked at it as working for the only African American in the U.S. Senate at the time, someone who was offering hope for the country. Being a small cog on that team was an opportunity, so you do whatever you can to help the team. You carry bags. You wash dishes. You answer mail. Whatever it takes. It’s not really about you and your own trajectory–it’s about the greater good.

To really learn from an assistant role, you need to take advantage of proximity and observation. How did you do that?

There’s no better way to learn than through experience. It’s one thing to read a paper or a case study, or look at cash flows on a spreadsheet. But it’s another thing to see somebody deal with [issues] firsthand, to see how people reason. You can have the greatest ideas in the world, but if you don’t have the ability to understand people and to deal with people, you’ll have no way to know how to implement those ideas or to lead.

In the book you describe a lot of awkward moments before you knew Obama well–having nothing to talk about with him, losing his luggage, bringing him food he didn’t like. Those moments sounded really unpleasant. How did you get through that?

Awkwardness is an interesting phrase. When you’re on a team and you played sports in college, as I did, you’re doing stuff with people all the time. In some scenarios you’re leading. In some scenarios you’re following. For me personally, I didn’t take one specific instance or one moment of awkwardness as a total sum. You have to say “this is a small piece of a bigger puzzle.â€ You have to have a good attitude, and recognize that things aren’t always going to be perfect.

Early on, you decided not to talk politics with him, and over time that helped you develop an easy camaraderie focused on your shared interest in sports. Why did you take that tack?

I was 23 when I started working for him. What was I going to advise him on? When there was something he couldn’t do or didn’t understand, he’d ask me, and I’d give my take. Sometimes you can give advice to people and they don’t even know it’s advice. If you spend your time trying to convince someone what you want to do is the right thing, you’re not always going to have a great success rate. Sometimes the best way to be an advisor is to ask good, thoughtful questions, to show you’re paying attention, to show you understand.

A lot of people look at an assistant job as a starting point, but you didn’t seem to be angling for promotions. Why not?

Everything doesn’t have to be linear. Just because you don’t move up today doesn’t mean you can’t move up a few years from now. Also, one of the challenges of being 23 and going to work for someone is that when you’re that young, people tend to always see you as that 23 year old, even once you’re 30. That’s partially the reason I went to get my MBA.

CEOs typically don’t have a “body man,â€ but Amazon and other companies do run programs in which high-potential managers spend a year as an assistant to the CEO. Should more companies look at these jobs as developmental roles?

My assumption is if you’re hiring someone who’s going to work for your company, it’s always developmental … [But] I don’t know how easy it is to recreate the job I had, because in a normal job you don’t spend that much time with anyone else. Even in very competitive workplaces, you might work 7 am to 9 pm, but people typically have dinner on their own, they wake up on their own, they have weekends off.

How are you using what you learned as an assistant in your career today?

I learned that it’s really important to build great relationships with people who are in a support role to a principal, and that the thing that makes an opportunity [like the one I had] successful is trust. You need to trust that the person has the know-how and perception to act, and to represent their boss, when dealing with other employees or other businesses. Trust is what lets you sleep well at night–it’s really invaluable.