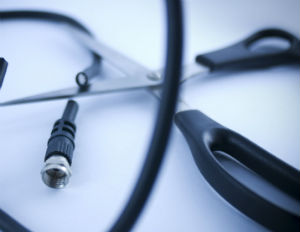 A new report says that more people cut off their cable or satellite dish service in Q1 2015 than ever before, and that for the first time, the number of pay TV customers fell during this time period.

[Related: How Young Professionals Can Land a Job in Media]

The study, conducted by research firm MoffettNathanson, claimed “cord-cutting has finally accelerated,â€ pointing to the rise in popularity of TV streaming services such as Netflix, Hulu and YouTube as one cause and warning “it’s not too early to get worried.â€

Numbers from the study, reported by Variety, showed a total loss of 31,000 cable or satellite customers during Q1. Though the numbers aren’t huge, Variety cites numbers from the U.S. Census Bureau that report an added 1.26 million households added. Taken together, it suggests that not only are people cutting their cable or satellite service, many more never signed up for a traditional subscription TV service in the first place.

This decline follows some 1.4 million households cancelling their service throughout 2014, Variety reports.

Dish Network lost 134,000, according to the paper, with many dropping off after disputes with Turner and Fox. Meanwhile, its competitor DirecTV added 60,000.

Cable companies, however, lost a total of 86,000–Time Warner Cable being the only gain subscribers, about 33,000–and satellite lost 74,000 customers. Pay TV services from AT&T and Verizon, which have fiberoptic networks, added a total of 140,000 customers.

Still, with services such as Sling TV, PlayStation Vue and HBO Go and Now, MoffettNathanson declared “it is only going to get worse” in the pay TV game. “It’s too soon to panic. But it’s not too soon to be genuinely worried,â€ the report noted.