Rick Ross Bets $100,000 On Miami Heat Having a Better Record than Cavs 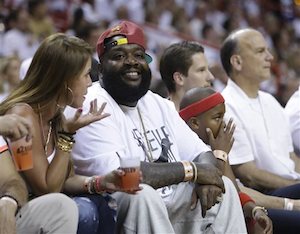 Rick Ross has been making his promotional rounds for his newest album, Hood Billionaire, and he’s had some interesting things to say about LeBron James.

The parole officer-turned-rapper continues to put on for Dade County, saying that even with James back in Cleveland, he and his Cavaliers won’t finish with a better win-loss record than the Miami Heat this year. During his appearance on New York City’s Hot 97, Ross continued to tout the team as championship contenders and is willing to put money where his heart lies.

“We most definitely finishing better than the Cavaliers. I’ll put 100 grand on that,” Ross said to Hot 97’s Funkmaster Flex. Hitting below the belt towards James, the Miami representative believes that the Heat will play better team ball without him. “I feel like we’ll be more balanced this year,” Ross said. “You know [James] is most definitely one of the greatest ever, if not the greatest… but he brings a lot of baggage, too.”

Currently, the Heat are 5-3, which is a comfortable boost above the Cavs, who are sitting at an even 3-3 start to the regular season. A huge part of Miami’s success is due in part to additions such as Luol Deng and Josh McRoberts, and the inspired play by Dwyane Wade and newly minted team captain, Chris Bosh. According to Ball Don’t Lie, the Heat possesses the fourth-best team offense in the league, averaging 108.3 points per 100 possessions through seven games.

Meanwhile, the Cavaliers, which boast their own “Big 3” of James, Kyrie Irving and Kevin Love, are struggling to find their chemistry and are playing “passive-aggressive” basketball.

So, does Rick Ross have a strong shot at doubling-down on his $100,000 bet? Share your thoughts on The Bawse putting his money where his mouth is in the comments section below.