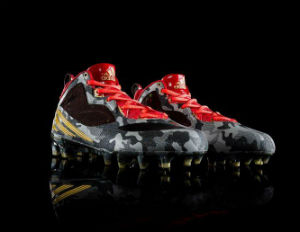 He was born in Okinawa, Japan where his parents, Robert Jr. and Jacqueline were sergeants in the U.S. Army.

So when Robert Griffin III takes the field with these special edition cleats (pictured) sure, he’s honoring the men and women who serve in the armed forces. But he’s also honoring his parents.

ESPN’s Darren Rovell is reporting that all proceeds from a limited edition box retailing for $1,111 will go to Operation Renewed Hope Foundation. The box includes the cleats, a “Know Your Why” shirt and socks.