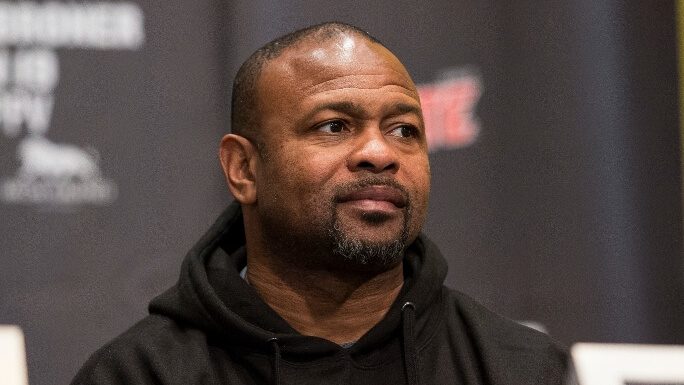 (Image: Twitter)
Dual United States-Russian citizen and former boxing champ Roy Jones Jr. has weighed in and offered to help WNBA player Brittney Griner gain her freedom to return to the United States from Russia.
The consensus remains that Griner has been unfairly imprisoned in Russia since Feb. 17 after Russian authorities conducted a search of her luggage at the airport and concluded vape cartridges in her possession contained cannabis oil.
Many people, politicians, athletes, and government agencies have joined in the fight to free her. Now, according to TMZ, the former boxing champion has said that he’s working behind the scenes to get the WNBA player home. Jones stated that he is willing to travel to Moscow to escort the WNBA star back to the states.
“Would I put my life on the line, take a chance to go to Russia to exchange prisoners? Yes, I would,” Jones says as he explains his reasoning. “Because if [Brittney] was my daughter, I would want somebody to do the same thing for me.”
It was reported earlier this week that her detention in Russia was extended again since being imprisoned. This time, her extension is until July 2 according to the Russian state news agency TASS. This is the third extension of Griner’s imprisonment. The first extension took place in March when they extended her stay to May 19. Six days before that extension was expected to be lifted, it was extended until June 18. Once again, they extended it to the beginning of next month.
Last month, the State Department reclassified her as wrongfully detained and thereby transferred oversight of her case to the State Department Presidential Envoy for Hostage Affairs (SPEHA).

Jones, with the help of President Vladimir Putin, became a citizen in 2015. The retired athlete says he reached out to several of his Russian friends.

“I had a friend, a couple of my friends that I knew, I called and I asked him ‘Is there any way we can try to facilitate?’ because I don’t do politics. I’m a sports figure and they love me as a sports figure. ‘Is there any way we can use my sports influence to possibly can get anything arranged to help get Brittney home?'”
He stated that there could be the possibility of a prisoner exchange.
“My friend called me back and he said, ‘yes, they said they’d be willing to do a prisoner exchange.’ I said, ‘Well it’s probably rough because the prisoner exchange is probably a real prisoner.’ She’s not necessarily a person that’s a real prisoner but I’m sure that maybe the U.S. will be understanding of this and get her back home because I’d be terrified if my kid was stuck in a foreign country in jail, you know?”Jones claims that one of his friends has a direct connection to the Russian president.