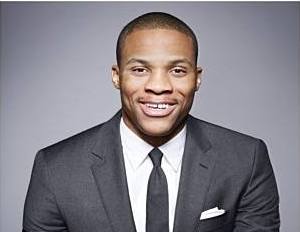 According to Women’s Wear Daily, Oklahoma Thunder basketball player, Russell Westbrook, is working with Barney’s on a sportswear and accessories collection that will hit the stores in July for the fall season. The collection will have its own hangtag – Westbrook XO Barneys New York, short for Westbrook Exclusively Ours Barneys New York.

Tom Kalenderian, Barneys executive vice president for men’s wear, said Westbrook was “very accessible and stayed closeâ€ when they were working on the collection. “We chose the designers because they were experts in their field and there was a natural fluidity with Russell’s style and taste. But everything was very collaborative,â€ he said.

Barneys will unveil the collaboration at a dinner in Paris, which will be co-hosted by Burlon, during the men’s shows later this month. “This will be my first time going there,â€ Westbrook said. “I’m really looking forward to it.â€