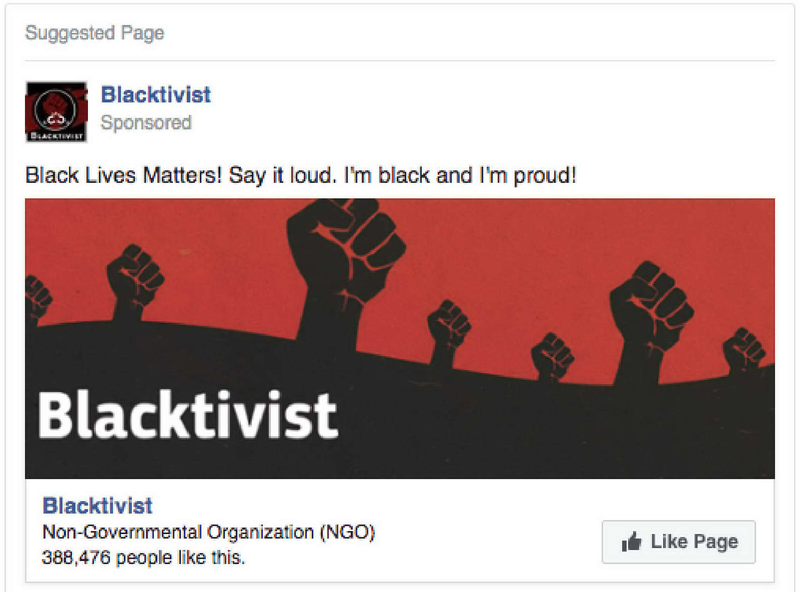 Its new report, released earlier this week, states that the Internet Research Agency, a front for a Russian troll farm, used social media to post subtly racist content to incite conflict within the black community.  Thousands of Facebook, Instagram, Twitter, and YouTube accounts were created with the aim of harming Hillary Clinton’s presidential campaign and supporting the election of Donald Trump.

“By far, race and related issues were the preferred target of the information warfare campaign designed to divide the country in 2016” the report stated. ″(N)o single group of Americans was targeted by IRA information operatives more than African Americans.”

The Russian posts and ads mirrored social justice movements that were already prominent in the black community like “Black Lives Matter” with the goal of creating a negative response from other ethnic groups.

Social media companies like Twitter and Facebook have come under fire from politicians and activists about their roles in the election interference in 2016. The social media giants have been scrutinized about their lack of control and policing of their platforms in ridding bad actors.

Facebook and Twitter said they removed thousands of troll accounts leading up to the 2018 elections. “Through ongoing analyses and investigations, we continue to build on our contextual understanding of these networks of accounts to improve our ability to find and suspend this activity as quickly as possible in the future,” Twitter’s director of public policy Carlos Monje Jr. told NBC News.

In 2016, Facebook users engaged over 11.2 million times with a page called “Blacktivist,” which was actually a troll account from Russia targeting African American voters. Almost all of the account’s YouTube content involved violent acts against black men, the report stated.

The social media giants are now more aware of the potential risk and vow to be much better during the 2020 presidential election cycle. “We have stepped up our efforts to build strong defenses on multiple fronts…We have also invested in technology and people to block and remove fake accounts; find and remove coordinated manipulation campaigns; and bring unprecedented transparency to political advertising.” Facebook said in a statement.