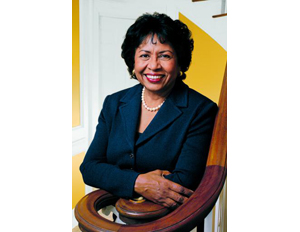 “We are fortunate to have such a high caliber scholar and administrator who can step in without missing a beat,” says Texas A&M System Chancellor John Sharp, in a statement. “Dr. Simmons has been an important figure on the national stage for decades. She has the credentials to be the president of any university in America. I am so excited to have her join us.”

Simmons, the first black person to lead an Ivy League college, led Brown University from 2001 to 2012. In addition to her leadership roles at Brown and Smith, Simmons was a vice provost at Princeton University and a provost at Spelman College, a historically black women’s college in Atlanta. Simmons is also a Black Enterprise Women of Power Legacy Award honoree.

Simmons earned a Ph.D. in Romance Languages and Literature from Harvard University, but according to a statement released by Prairie View, it was her education at Dillard University, a historically black college in New Orleans, that she considered transformative.

“I was from a very poor family with 12 children, at a time when colleges were just desegregating,” she is quoted as saying. “I know how important historically black colleges and universities are for kids like I was.”

A Texas native, Simmons was drawn to leading Prairie View because of the school’s history, significance, and mission, as well as the fact that her brother attended the university.

“I have deep roots in Texas, and I was looking for a way to do something helpful for my community,” she says in the statement.