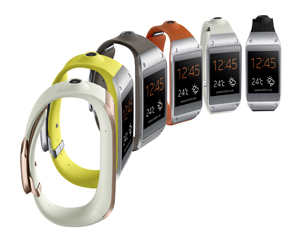 Samsung, which has done a terrific job stealing headlines from Apple, did it again with the Galaxy Gear smartwatch–a cool-looking unit with a nice color screen, a speakerphone and a tiny wristband camera.

While the Galaxy Gear brings many smartphone features to the wrist, it does so not with its own smarts, but by borrowing intelligence from Samsung’s other big announcement: the Galaxy Note 3 mega-phone with a huge, 5.7-inch screen.

The Galaxy Gear links wirelessly with the Galaxy Note 3–and only the Note 3 for now–and lets users make and pick up phone calls, check the weather, read incoming text messages and run a selection of Android apps. Aside from its clock functions, however, it’s basically a dumb terminal: It has to stream the data it needs from the Galaxy Note 3. The watch needs to be within five feet of the phone for everything to work. Once disconnected, the Galaxy Gear is a nice looking, fashion-conscious $299 watch.

The Galaxy Gear has just one button and charges in a special cradle. Look up a contact on the watch, touch a phone number and the Galaxy Note 3 completes the call. The watch supports voice commands, thus allowing users to complete calls without touching it.

Swiping up on the home screen brings up the phone dialer and swiping sideways rotates through functions and menu pages, including the page leading to the customized Android apps. The apps include TripIt, which helps users manage travel schedules, and Glympse, which lets users transmit live maps of their locations to friends even if recipients don’t have the app.

The 2.75-ounce Galaxy Gear’s 1.63-inch, 320-by-320 pixel SuperAMOLED display is crisp and clear. The side-mounted, 1.9 megapixel camera lets users look down (like comic book hero Dick Tracy) on the display to see what they’re shooting.

Since the Galaxy Gear only works with the Galaxy Note 3, and is basically version 1.0 of a new product category for Samsung, it remains to be seen how much buzz the watch will generate. The watch will be available Sept. 25 in Jet Black, Wild Orange, Lime Green, Oatmeal Beige, Mocha Gray and Rose Gold.