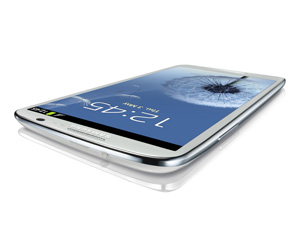 The Galaxy S III is available on all four wireless providers.

The Galaxy S III smartphone launched this summer on all four major carriers boasting advanced sharing features and a beautiful screen. But Samsung isn’t only looking to appeal to the consumer market — they’ve optimized the GSIII for enterprise users, making it a great choice for small businesses and large corporations in the BYOD (Bring Your Own Device) era.

Though this is a big phone (check the 4.8-inch display), it doesn’t feel heavy thanks to its light, slim design and comfortable curves. Those coming from iPhone-sized devices may need to adjust, but those used to operating a phone with two hands will transition easily. Under the back cover is a user-replaceable battery and a microSD card slot (max 32GB).

Samsung adds a user interface, or “skin,” on top of Android 4.0, which makes the operating system easier to use. The GSIII offers other features that enhance the Android experience, including several around sharing content easily.Â  Many components utilize the NFC (Near Field Communication) chip inside to transfer documents, media, contact cards and more by touching one phone to another.

Samsung’s Siri competitor, S-Voice, isn’t as useful as anticipated.Â  The voice recognition isn’t as reliable, thus it often misinterprets what you want or simply doesn’t do what you ask.

More impressive is the 8MP camera on the back. It snaps good pictures indoors and out, and the app includes settings to help you get the best shot even if you’re a photo novice.

The Galaxy S III is a Samsung Approved For Enterprise (SAFE) device with a suite of business-ready features that give individual users and IT departments greater control over the device. It supports over 300 IT policies and mobile device management for scalable security, full Microsoft Exchange ActiveSync support, strong encryption and advanced VPN access.

The GSIII helps users collaborate on and share presentations and documents even when there’s no projector in the room with Group Cast. This feature utilizes a secure device-to-device connection between S III phones (and future Samsung Android devices) for instant sharing and on-screen communication.

Performance-wise, the dual-core processor and 2GB of RAM inside make for a speedy smartphone that can handle even resource-intensive apps. The 2100mAh battery inside lasts all day with the right tweaks. Samsung makes this easy with a battery-saving mode right in the settings.

All four national and some regional carriers sell the same version of the S III. The only difference is the radios inside. The AT&T and Verizon versions run on 4G LTE networks. The Sprint version will run on 4G LTE when that network becomes available in select cities by the end of 2012, otherwise it falls back on 3G speeds. The T-Mobile version runs on the carrier’s HSPA+42 network.

Bottom Line: Speedy performance, comfortable design, and a long list of excellent features (including robust enterprise support) make the Samsung Galaxy S III a good choice for business users from large corporations to entrepreneurs, both as a company phone or as your all-in-one work/personal device. The latest in the Galaxy S series runs for $199 (16GB AT&T, Sprint, Verizon, US Cellular); $279 (16GB T-Mobile); $249 (32GB Sprint, Verizon, US Cellular); $329 (32GB T-Mobile). All prices are with a 2-year contract. (www.samsung.com/us)