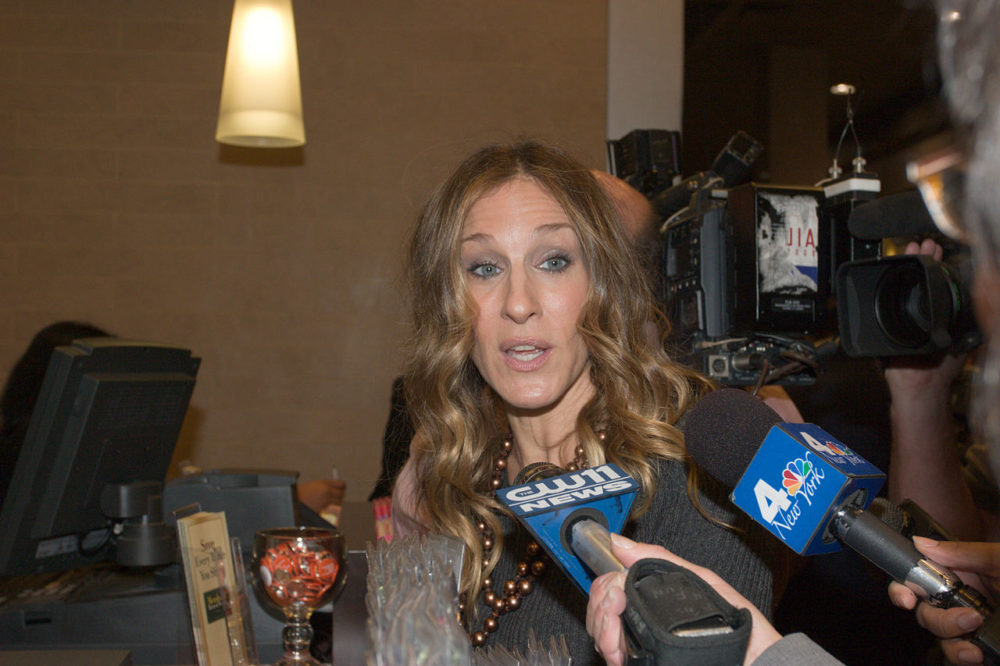 Activists, community leaders, and restaurant owners on Thursday gathered at the front of SJP Collections in New York as a voice of opposition against Sarah Jessica Parker’s support for ending the tipped wage credit, which they say threatens employees and restaurant owners.

In New York State, tipped workers are paid a lower minimum wage, but they must earn at least the full minimum wage when tips are included. The difference between the tipped wage and the full minimum wage is called the tip credit, which Minister Kirsten John Foy said allows restaurant owners to keep labor costs down while keeping it affordable for people to dine out.

Early in March, Parker, along with 15 other actresses invoking the #MeTooMovement, wrote a letter to New York Gov. Andrew Cuomo, in support of the One Fair Wage effort, noting that 70% of restaurant servers are women and that research has shown “how relying on tips creates a more permissive work environment where customers feel entitled to abuse women in exchange for ‘service.’” The actresses, including Jane Fonda, Natalie Portman, Lily Tomlin, Amy Poehler, Reese Witherspoon, Brie Larson, Debra Messing, Ashley Judd, and Sarah Silverman, urged the governor to do away with the state’s tip credit for restaurant workers.

A countereffort of 500 restaurant workers organized by Maggie Raczynski, a bartender at the Clifton Outback Steakhouse, produced a letter of their own.

“You’ve been misled that we earn less than minimum wage and that we’re somehow helpless victims of sexual harassment. “Thank you for your concern. But we don’t need your help and we’re not asking to be saved,” they wrote.

In April, the New York Post reported that a small-screen actor wavered on her decision to sign the letter to the governor. In her email sent to the Restaurant Workers of America—which opposes any compensation changes—the actress, who is unidentified, apologized, through an agent representing her. “She sends her deepest apologies and never intended to insult the restaurant professionals. She would like to rescind her signature from the letter that was sent to Governor Cuomo. Should we do that through you or where it originated from?” But she later decided to keep her name on the letter.

According to the United States Department of Labor:

After seven different hearings and a recommendation by a wage board in 2015, Cuomo and the state’s labor commissioner, Roberta Reardon, will decide whether to eliminate the tip credit, which Cisse Elhadji, the executive chef and co-owner of Renaisance and two Ponty Bistro locations in Harlem, could potentially shut down his business.

“Minimum right now, I have 30 to 40 people working for me, imagine I shut down my place, all these people will (have to) go look for another job,” Elhadji said. “We need help, but this is not going to help us.”

What About Fast Food Workers?

Supporters of the argument for a consistent minimum wage plan say it would reduce wage theft by employers in industries with tipped workers, who are often women, minorities, and immigrants. While Foy agrees with his progressive counterparts that it is indeed time to raise wages for American fast food workers, “but to compare McDonald’s to Melba’s is a folly.”

“It is not appropriate and [it’s] unwise; neither is it economically viable to raise wages at the expense of the existence of the business,” he said.

Late in May, Parker hosted a fundraiser for the One Fair Wage campaign, an organization fighting for increased minimum wage nationally. The purchased tickets went for as much as $50,000 according to the release by the Manhattan Chamber of Commerce and the event had to move venues when the location was publicly revealed, to avoid protesters.