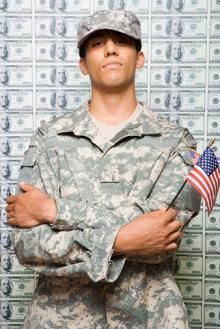 The U.S. Senate is examining efforts to see that more veterans have a chance to become entrepreneurs — to open up businesses and create jobs. This means giving veterans the training, tools, and resources they need to start small businesses and ensure that they will be able to make ends meet.

The Senate Committee on Small Business and Entrepreneurship heard testimony this week from veterans about the challenges they face in starting their own small businesses and how the U.S. Small Business Administration (SBA) can help ease the transition from soldier to entrepreneur. The hearing, “From Military Service to Small Business Owner: Supporting America’s Veteran Entrepreneurs,â€ examined the effectiveness of SBA programs, and proposed legislation aimed at expanding and improving SBA programs.

There are about 2.8 million veterans from the wars in Iraq and Afghanistan. With continued withdrawal of U.S. forces from Afghanistan, the population of recently returning veterans will increase. Nationwide, 2.4 million veteran-owned businesses have generated more than $1 trillion in sales and support six million jobs. In Washington state alone, 48,000 veteran-owned small businesses have annual sales or receipts of more than $20 billion and support nearly 100,000 jobs.

As more soldiers return home from active duty, providing the right tools to veteran entrepreneurs is key to helping them grow the economy and support their families. About 21.4 million veterans live in the United States. Veteran entrepreneurs returning from the battlefield face the same obstacles all small business owners face when starting and growing a business, plus additional challenges of transitioning back to civilian life. Cantwell stressed the need for both private sector and federal efforts to help veteran entrepreneurs.

Members of the Small Business Committee heard testimony from three veteran small business owners, including Trena Payton, the president of ABN Technologies in Lacey, Washington. After concluding her service in the military, Payton founded ABN in 2003 and has expanded her business to 12 employees.

ABN is a certified veteran, woman, and minority-owned company that provides IT support and project management. Payton started her business after receiving Small Business Administration counseling and using an SBA Express Loan and the 8(a) business development program. Last year, Payton was awarded the “On the Rise Government Contractor of the Yearâ€ award at the Summit for Success by American Express.

“When I started my business, I made good and bad decisions — like most startup businesses,â€ Payton told the committee on Wednesday. “However, most of the bad decisions I made were due in part to get piecemeal information that entrepreneurs get coupled with that soldier’s enthusiasm to get things done. As my story reflects, federal programs for veterans have been critical to my company’s success. Small business programs, especially contracting programs, have leveled the playing field allowing veterans entrepreneurs to thrive.â€