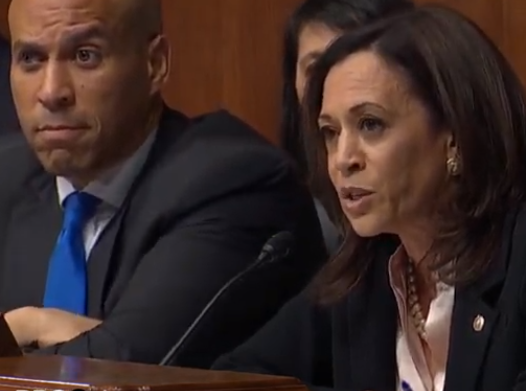 Kamala Harris and Cory Booker at a hearing. (Photo courtesy of Twitter)

Senators Kamala Harris (D-CA) and Cory Booker (D-NJ) are leaning on the FBI and the Justice Department to address concerns of African Americans on how cops are dealing with the CDC, urging people to wear face coverings when they go outside.

The CDC recommended April 3 that individuals “wear face coverings in public settings where other social distancing measures are difficult to maintain.” Less than a week later, incidents of racial profiling began popping up across the country and abroad. The incidents prompted Harris and Booker to send a letter Attorney General William Barr and FBI Director Christopher Wray.

“With the ongoing public health emergency, it is more important than ever for law enforcement to build trust with communities of color. Accordingly, we urge your agencies to immediately provide training and guidance on bias, policing, and disproportionate or selective enforcement during the COVID-19 pandemic. We also urge your agencies to encourage the use of federal guidance to create model recommendations at the state and local level.” Harris and Booker wrote.

African American men and women have been posting incidents on social media of racial bias due to wearing facemasks. Several incidents have occurred between the police and African Americans, including two incidents in Philadelphia. Harris and Booker believe federal law enforcement officials should instruct local departments on how to avoid these incidents.

“The Justice Department should send instructions to state and local law enforcement, consistent with this existing guidance. But recent cases also highlight the need for additional guidance on bias and enforcement during the COVID-19 pandemic,” Harris and Booker’s letter states.

Incidents like these are even occurring outside the U.S. A post on Twitter showed cops in the U.K. telling an African American man to leave a park while a white man does handstands a few feet away.

Police officials have pushed back on the letter.  According to Jim Pasco, executive director of the National Fraternal Order of Police, police departments across the country are overwhelmed due to the virus and have previously received bias training.

“In the circumstances we currently find ourselves in, I find it troubling that anyone is asking the nation’s already overworked officers to take time out of their work for training, based on a few allegations of improper conduct. This seems like political opportunism, at the least opportunistic time for the country,” Pasco told the Associated Press in a phone interview.

The coronavirus has been harder on African Americans, as they are forced to deal with a lack of healthcare while dealing with the economic turmoil the virus has created.