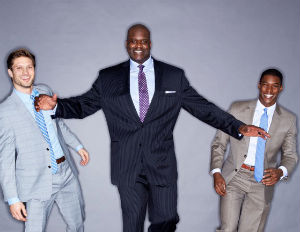 The 7’1″, 325 pound 4-time NBA champion, who is mostly known outside of his playing career for his stints as a rapper, actor and his current gig as a commentator for TNT’s “Inside the NBA,” is also an entrepreneur with his hands in various ventures.

O’Neal was a pre-IPO investor in Google, has equity stakes in Vitamin Water and Muscle Milk, and is also a minority owner of the Sacramento Kings. And while Shaq has a diverse portfolio he felt there was something missing.

“I was bored and wanted to tackle a different industry and why not fashion,” said O’Neal. “I remember coming to stores as a young kid and not being able to find clothing in my size. I hated having to go to Big and Tall stores and not shop at the local department chains like my friends. Â Those stores were also much higher priced because of the lack of clothing made for men my size. I want to make sure that the guy in the 60 regular suit [size] can look just as good as the 40 regular suit wearer. That’s my goal.”

In the last twenty years, the evolution of Shaq’s personal style from the start of his playing career in the mid 1990’s to his look today is evident. From the days where his suits were flashier and had a baggy look, to now when you see him in fitted suits in solid colors similar to the collection he debuted yesterday.

The collection, which is priced between $150 and $400, and drew a crowd of hundreds yesterday at Macy’s, will be available at over 100 stores [Macy’s] nationwide. The options include solids, plaids and stripes. They also come in different colors with sharkskin in shades of black, navy, tan and grey. It will be available in regular and big and tall sizes.

Shaq’s suit collection will be on full display during the NBA playoff coverage on TNT’s “Inside the NBA.” Shaq, who appears on the TNT set with former players Kenny Smith and Charles Barkley, made it clear who was the best dressed former athlete on set.

“That’s not even a question,” said Shaq with a laugh. “Anyone with eyes can see it is me.”