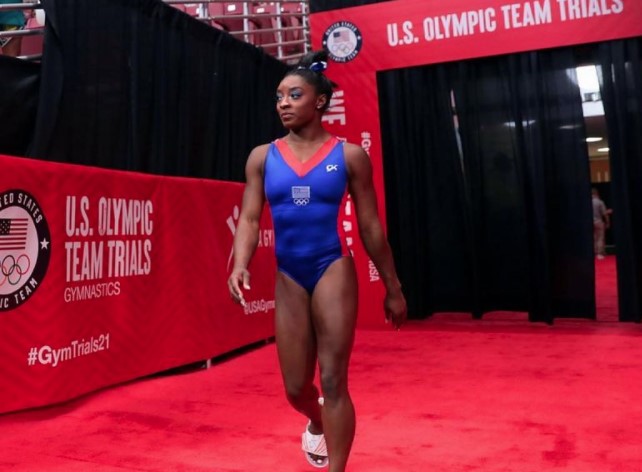 Simone Biles is making headlines for her dazzling performance during the first night of the U.S. Olympic gymnastics trials.

On Friday, Biles led the women’s competition with an all-around score of of 60.565. She received top scores in the vault, floor, and beam routines, placing her ahead of second place gymnast Sunisa Lee.

“Going into this, I know exactly what to expect,” Biles told NBC during an interview. “And I’m a lot more emotional this time around, which is so crazy. Even walking out, I was like tearing up and crying and the girls were like, Are you OK?”

Simone Biles is on a mission to secure her spot on Team USA for the Olympics. The event will kick off on July 23 in Tokyo, Japan.

Biles, 24, is currently the most decorated World Championship gymnast in the country, NPR reported. She’s claimed 25 championship medals and four gold medals. She is considered to be the greatest gymnast of all time.

Despite her success, she still puts in the work to improve her performance every day. Last month, Biles became the first woman to land Yurchenko double pike vault performance. Named after Russian gymnast Natalia Yurchenko, it involves a stunt with a single flip. Biles added a twist to the move by incorporating an additional flip and making it a double pike.

“[I knew] it was going to be fine because in training I had done it so many times,” Biles told PEOPLE. “I do it every other day. And for the last couple of months, shoot, I would say like four months we’ve done on competition surface. So I felt pretty confident.”

Although Biles had success with the move at the U.S. Classic, she didn’t add the Yurchenko double pike to her routine on Friday. Instead, she started on uneven bars, recording the third-highest score of the evening. Then, she proceeded with a balance beam routine which featured the double-double dismount. This routine, famously named after her, was a fan favorite. She topped it off with a floor routine which included a triple double.

Biles’ performance put her nearly three points ahead of her closest competitor, Sunisa Lee. She received scores over 15 on beam, vault and floor, earning her highest floor exercise score with 15.366 points, Today reported. Her uneven bars performance earned her 14.6 points.

Team USA Will Be Announced Soon

Jade Carey has already earned one of the individual spots due to her performance in the World Cup Series over the past three years.