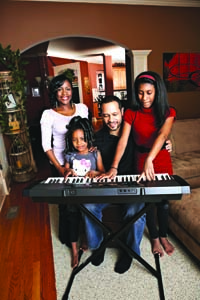 While the Foys’ home may be roomy,Â  the couple does “conserve on other things.â€ Unlike the reputation metro Atlantans have garnered for being extravagant, the Foys have decided to keep things simple. They are avid couponers who’ve opted to focus less on flashy clothing, expensive cars, and copious material possessions. Remarkably, both of their cars are paid off and they haven’t had a car note in four years. Devin is such a big proponent of buying cars with cash that he hasn’t had a car note in the 16 years they’ve known each other, LaShonda shares. To do this effectively, the Foys start saving ahead of time and use any extra income from income tax returns, commissions, or bonuses to contribute to significant purchases such as cars, which they keep on average eight to 10 years.

The couple also earns income from three rental investment properties they purchased over the last decade. LaShonda says that the amount of income each property generates varies depending on the market. During a good period, they generate about $10,000 annually from the properties compared to $3,000 annually or breaking even during a slower period.
Their life insurance policies are another safeguard the Foys invest in. The policies cover up to $1.5 million for each of them, ensuring that if one of them passes unexpectedly, the other can continue to maintain their standard of living, educate their children, and position them for financial stability and success.

“We used a life insurance calculator online that tells you how much money you or your spouse would need in case one of them passes. So we used that and bumped it up by 10%,â€ says LaShonda.

HOW THEY DID IT

nÂ  Save for retirement first. While the Foys are saving for their retirement and daughters’ education fund simultaneously, they both say paying for the former is the priority. If there’s money left over, only then should it be put away for college because there are a lot of ways to pay for it otherwise, Devin advises. “Your retirement is crucial. We take care of ourselves, we’re both in excellent health, there’s a possibility that we can live a very long time,â€ he says, adding they don’t want to be a burden on their children. LaShonda adds that it would be hard to assist their daughters if they themselves had financial instability.