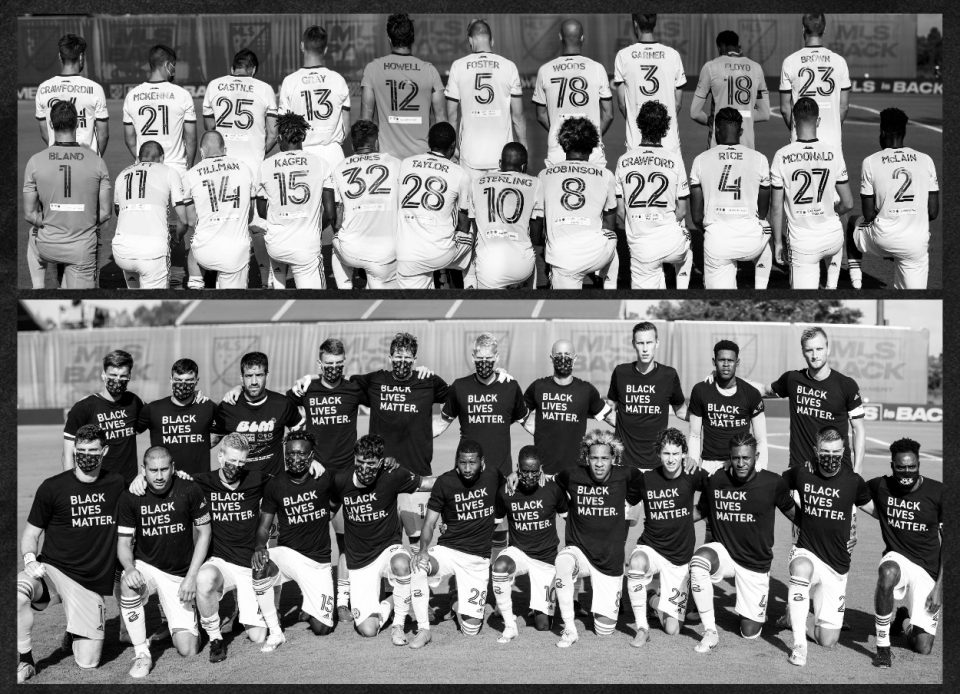 A Major League Soccer game between Philadelphia Union and New York City FC featured Union players displaying the name of Black police brutality victims on the backs of their jerseys, according to ESPN.

The soccer players showcased “Black Lives Matter” T-shirts, and proceeded to take off the shirts for the team photo. As they turned around, the shirts revealed the surnames of the police brutality victims on the back of their shirts. Among the victims of police violence were George Floyd, Breonna Taylor, John Crawford, Eric Garner, Alton Sterling, and Tamir Rice.

The game, part of the MLS is Back tournament, took place in Kissimmee, FL.

Our players stand together. One name too many. pic.twitter.com/tPoR8DWveN

“At the start, certainly things going on in our country far bigger than soccer,” he said after the match. “I have to say I’m very proud of my players throughout the past four months for the leadership they’ve shown, the leadership role they’ve taken in the BLM movement, educating the other players on our team.

“The idea today was action over permission; I hope the league understands that. It was done to show respect, to learn, to grow, to make our country better. I’m really proud of my players for everything they’ve done.”

The team’s players have gone further to show their support in the BLM movement by posting a custom made armband as well as shin guards that will be worn during the tournament.

Our players joined together to create a custom armband for #MLSisBack that our Captain @AleBedoya17 will be wearing for the tournament.#SayTheirNames pic.twitter.com/ZZe4Ev2RCJ

Our entire squad will be wearing these specialty #EndRacism shin guards during #MLSisBack tournament & beyond.#DOOP pic.twitter.com/mGZ4gT9MZv

Union defender Ray Gaddis said the idea came from talking to all of the team’s players.

“It was to continue the conversation that needs to be had. We first and foremost asked our team if they were OK with it because solidarity is key and we want to make sure everybody feels comfortable,” Gaddis said after the match. “Actions are louder than words. Again, it’s to further the conversation and to continue to use our platform to be a voice for the voiceless. It was a collective group effort.”

Gaddis said it was important to see the entire team be on board with social change.

“For me, being a player in the Philadelphia Union organization for a while now, it means a lot,” he said. “For me, within our club, it shows how much solidarity we have—on the field first and foremost, but off the field. We have a great coach who has taken a stance with us, as well as this organization, and it’s only going to make us better in the future, not just as soccer players but as human beings as well.”