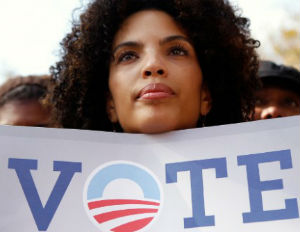 No, that headline is not a misprint.

In states all throughout the nation, people are voting at their local polling places, court houses, schools, and even in their kitchens. In fact, millions of people will cast a vote for the candidate of their choice before November 8, making up more than a third of the total votes for president. The question is: will you be one of them?

Early voting takes many forms, including vote by mail and visiting designated precincts and absentee ballots. However, before you can vote early, you need to ensure that you are registered to vote. Visit IWillVote.com to check your registration. If you’re not registered, you can knock it out right there online in no time.

Early voting is great for everyone, but it is especially important for seniors, people who work during voting hours on Election Day, and students attending school outside their normal voting jurisdiction. This idea of early voting has been with us for some time. Each year, we see more people participating in this process. It is a critical time for campaigns, as early voting is an opportunity to “bank votes” before the scheduled Election Day.

Democrats have performed best in the early vote test the past several presidential election cycles, with more than a third of the total votes cast during the early voting period in 2008 and 2012. This is a great advantage to campaigns, which usually work from a calculation of projected votes needed to win. The calculations are often based on voting precincts and neighborhoods favorable to that candidate. The more votes that are cast early in a particular area, the sooner the campaigns know how they are performing and the number of actual votes needed on Election Day. This also allows the campaign to shift resources to targeted areas, as needed.

While early voting is really convenient and allows you to avoid waiting in long lines as well as other challenges we see on Election Day, it is also incredibly helpful to campaigns in their broader, get-out-the-vote efforts.Â In fact, a candidate can lose the head-to-head vote on Election Day, but still win the state because they won during the early vote stage.

Now, there are some who believe this early voting is unfair. We have seen challenges to these efforts throughout the country in Georgia, North Carolina, Texas, and Wisconsin–to name a few. In some places, the number of days for early voting has been cut, weekend voting has been eliminated, and mail-in ballots are more heavily scrutinized; all in the name of reducing voter fraud, when there has been no proof of prevalent fraud anywhere in the country.

In fact, what we see muchÂ more are efforts to suppress the vote, particularly in communities of color, which traditionally vote more for Democrats. Notices posted that give misinformation on voting site changes, law enforcement’s heavier presence near voting precincts, and even the existence of mailed notices saying that Election Day has passed are not uncommon tactics. One of the best ways to combat this effort is to (you guessed it) vote early.

In many places in America, today is Election Day. To find out more about the early voting rules where you live, click here. Also, don’t forget to check your voter registration or register to vote at IWillVote.com.

Cast your vote early and make sure it counts.