Son of Oldest Buffalo Shooting Victim Asks Senators 'What Are You Doing?' 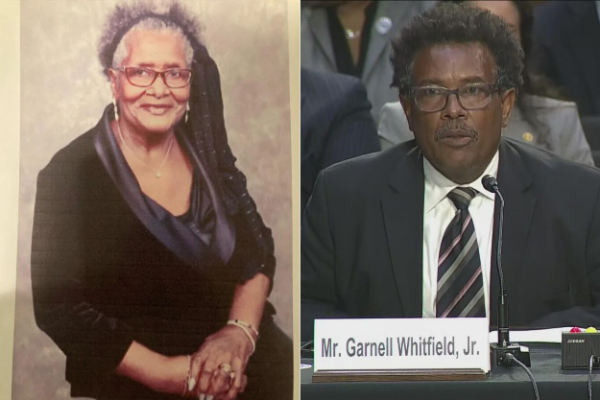 The son of the oldest victim slain in the Buffalo mass shooting last month met with lawmakers to ask what they plan to do about the ongoing issue of gun violence plaguing the country.

On Tuesday, the U.S. Senate Judiciary Committee held a hearing on the Buffalo, New York, killings in May, ABC News reports. Garnell Whitfield Jr. appeared at the hearing, where he asked lawmakers to “yield your positions” if they didn’t plan to act on “the urgency of the moment” to enact gun reform laws.

Whitfield is the son of 86-year-old Ruth Whitfield, the oldest victim of the May 14 Buffalo supermarket shooting that an 18-year-old white supremacist carried out.

“You expect us to continue to just forgive and forget over and over again. And what are you doing?” Whitfield asked the Senate panel. “You’re elected to protect us, to protect our way of life.”

Son of Buffalo shooting victim asks Senate: "Is there nothing that you personally are willing to do to stop the cancer of white supremacy and the domestic terrorism it inspires? Because if there is nothing, then…you should yield your positions." https://t.co/E0jccCvms4 pic.twitter.com/2M8kJyI0p1

The hearing, “Examining the ‘Metastasizing’ Domestic Terrorism Threat After the Buffalo Attack,” examined “the continued threat posed by violent white supremacists and other extremists, including those who have embraced the so-called ‘Great Replacement’ conspiracy theory, as well as the federal government’s response to this threat,” according to a committee release.

“I ask every one of you to imagine the faces of your mothers as you look at mine and ask yourself, ‘Is there nothing that we can do?’ Is there nothing that you personally are willing to do to stop the cancer of white supremacy and the domestic terrorism that inspires?” Whitfield added.

“Because if there is nothing, then respectfully senators, you should yield your positions of authority and influence the others that are willing to lead on this issue. The urgency of the moment demands no less.”

He ended his touching speech by honoring his mother and her memory while calling for action against white supremacy and domestic terrorism.

“My mother’s life mattered — and your actions here today would tell us how much it matters to you,” he added.