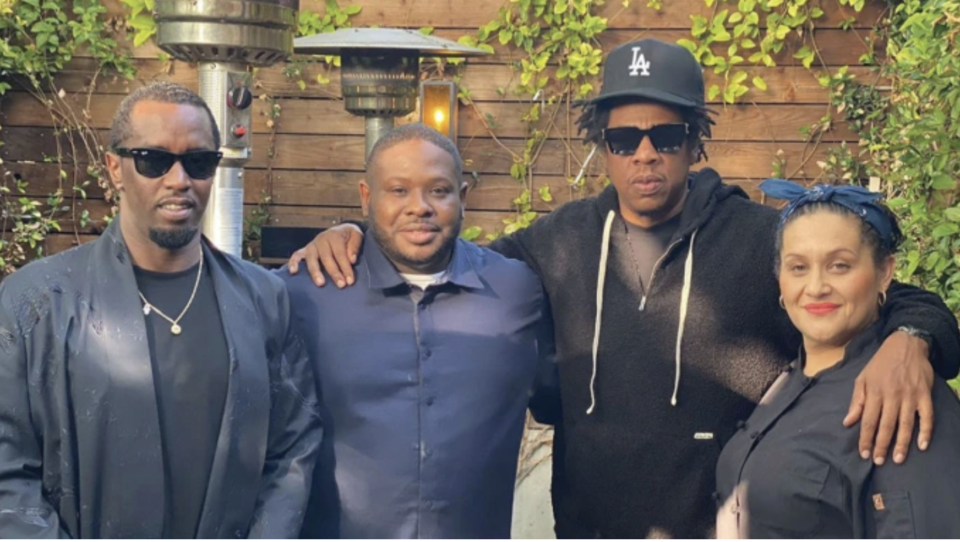 “What Happens when P Diddy ask Jay Z where he can get some #soulfood” From left: Diddy, Corbin, Jay-Z and former Alta Adams sous chef Gwen Etta. (Screenshot from Keith Corbin's Instagram)

A Black-owned restaurant in L.A. is where the Black Hollywood elite come to bask in the joyful ambiance while enjoying soul-food cuisine, reports the Hollywood Reporter.

Co-owner and chef Keith Corbin lost his job in an oil refinery and entered the hospitality space with Michelin-ranking restaurateur Daniel Patterson in October 2018.

The restaurant named, Alta Adams is located in the West Adams neighborhood of Los Angeles, and Corbin centers his dishes around ingredients found in California.

“California soul food restaurant that is dedicated to cultivating an equitable environment that celebrates inclusivity and empowers rising culinary talent, while serving delicious food that brings communities together,” describes Forbes of the dining spot.

Patterson, along with Corbin, decided to open Alta Adams on the corner of West Adams Boulevard and South Burnside Avenue as opposed to other glitzy Hollywood locations because Patterson wanted to address the inequities he sees in certain areas.

“It just felt right here,” Patterson says. “The right space, the right community, the right time,” said Patterson of the community that has a few beauty salons, churches, auto body shops, and a CrossFit gym but no restaurants, reports the Los Angeles Times.

“I get asked a lot, ‘Why do you care?’ and I say, ‘Why don’t you care?'” he says. “People who have privilege have a moral responsibility to do what they can to try and make the world around them more equitable through their actions.” Patterson purposely looks for disregarded communities to establish eateries.

Corbin says West Adams reminds of his hometown of Watts.

“It’s an area that needed some opportunity, and we came in the same way we went into Watts: what the community wanted and not what we wanted to impose on them,” Corbin says.

Before opening his successful restaurant, Corbin was filled with trepidation.

“I was nervous as hell,” says Corbin of his mindset shortly before its opening. “[But] for our soft opening, John Legend showed up. Then, from there, Tiffany Haddish. Tracee Ellis Ross showed up, and she told me that she would be the first person to book my restaurant for an event.” Ross came through on her promise and held her “Women of Black-ish” dinner there.

Corbin is extremely friendly towards the residents, but his menu keeps his customers loyal. He flavors his collard greens with wood-chip-smoked oil; he seasons his pork chops with spices; his oxtails are famous around the likes of Issa Rae, Sterling K. Brown, Jay-Z, and Diddy.

Patterson opened the door for Corbin to use his culinary talents towards making savory soul food dishes.

“[He] gave me the go-ahead to start experimenting, and I started doing soul food with expressive fresh vegetables and herbs. It was taking something I love and enhancing it with fresh products, taking something that’s old and making it new again,” says Corbin.

His grandmother taught him to cook, and he improved his skillset while serving time in prison for armed robbery, reports the L.A. Times.