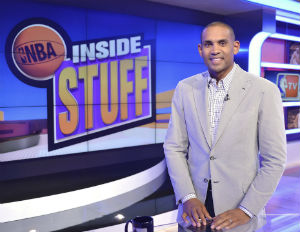 During the span of his playing career, Grant Hill was among the most respected figures in the NBA: a thoughtful, cerebral talent who just so happened to be one of the league’s most versatile swingmen. Hill, 41, retired last year. And for all of the league’s observers who saw Hill as the perfect fit for a front-office position, Hill is fast becoming one of the NBA’s most visible TV analysts.

Between appearances on NBA TV’s Game Time, TNT’s Inside the NBA and as co-host of Inside Stuff, Hill has gotten plenty of practice in front of the camera. It’s a good thing: among other duties all weekend in New Orleans, he and Chris Webber will be embedded on both team’s benches next Sunday as a kind of reporting 13th man. Look out, D.A.

Hill spoke to BlackEnterprise.com via phone from Atlanta on a recent weeknight. We asked him to give himself a grade on his performance so far, his favorite All-Star moment as a player and about Duke star Jabari Parker. He told us why, exactly, he worries about him at times.

B.E. Sports Biz: How are you? Thanks for agreeing to chat with us.

Hill: I’m great, thanks for having me be a part of it.

Is there one All-Star Game that means the most to you?

I had been hurt for four years. It really was questionable whether I’d play again but I was able to fight back after missing a good portion of those season’s. I had a good year that year and I was voted in. I had to fight and really battle to get back to playing, so that made making it in very gratifying.

Was that in Denver?

Yep, Denver. But they all were great. The first one was awesome. I was kind of riding high at that point. After things got kind of dicey with the uncertainty around my health and my career, to be able to fight back, make the All-Star game and play in it … makes it the one that will stick out the most for me.

What’s your favorite moment from the game?

I remember I caught an alley-oop. Wade threw me an alley-oop and I wasn’t sure if I was gonna be able to go up and get it. [Laughs.] My wife did the Canadian National Anthem. But really just to be back in that All-Star locker room was special. To be on that stage, I knew the amount of effort it took to make it happen. It was important for me to absorb it all and just be very appreciative.

You’ll be quite busy with this year’s All Star Weekend, what are you looking forward to most about All-Star weekend this year?

Well I’m coming at it from a different angles because I’ll be working. So there will be stress but not the stress of being a player where you have to balance making all of your appearances; but also making sure that you’re getting all your rest and handling your commitments. There’s just a lot going on. But I’m happy I’ll be close to the action talking about the game and doing our various shows. I’m excited.

It’s your first year doing television and you guys are notorious for being hard on yourselves — what kind of grade would you give yourself?

It’s interesting because I’m doing Inside the NBA, Game Time, Inside Stuff and they’re all kind of different animals. Inside the NBA is chaotic. [Laughs.] There’s a lot going on and there’s no rhyme or reason. Game Time is four hours where you’re really inside the games going into the details. Inside Stuff is more about the players and off-the-court topics. I’m not good at grades — I just continue to work hard and get better. I feel I’m getting more and more comfortable, it’s just all about getting reps.

Inside Stuff was gone for so many years and now it’s back. Why is now the right time for its return?

Since it first aired the world has changed so much. Social media has given everyone a platform but especially NBA ballplayers. Fans want access. They want to know more about their guys. I think the show allows for us to go in-depth with the personalities, the off-court interests away from the court with the players that fans love.

I think there’s a trust factor, too. A lot of these kids [playing now] grew up watching it. So they know that it’s going to be positive and showcase them. It’s been well-received and I think it was needed to show that side of the players that I saw for 19 years. It’s about the fans – just really taking us as fans into their lives whether we’re in the locker room, in our cars or at home or a restaurant. On a personal level, sitting down with guys — I interviewed Kevin Durant this past week — and having the the opportunity to get to know them myself has been really enjoyable. I’ve learned a lot but I’ve also enjoyed it.

What have you learned about this new generation of players?

I’m not that far removed since I was playing last year. I have a sense of today’s generation of player since I was in the locker room with these guys. With interviewing guys … a guy like K.G., we’ve competed and said ‘what’s up’ here and there, but to get to sit down with and ask him questions and hear what he has to say was cool. It was cool as a fan of the game and as a fan of his. It was a lot of fun to share the moment on TV. That’s been true with the Kevin Love’s and Kevin Durant’s of the world as well.

As for the young guys, it’s a different generation. These guys have grown up in a different time with a different set of experiences. I don’t judge and say, ‘Our generation was better’ — I embrace the differences, and I certainly saw them during my last six or seven years in the league as younger players were coming in. A lot of them just had a different attitude and mindset. That’s good! That’s OK. Each generation should be different.