Steve Harvey Won't Willingly Give Michael B. Jordan Relationship Advice: 'He’s Going to Have to Earn It' 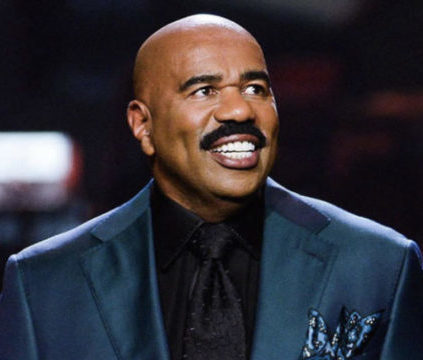 He has written a book giving women advice—Act Like a Lady, Think Like a Man—and is always quick to give relationship advice to anyone who wants to hear it.

Yet one thing comedian and TV game show host Steve Harvey will not do is willingly give advice to his daughter Lori Harvey‘s beau, superstar actor Michael B. Jordan.

Harvey appeared on E! News to respond to questions posed to him by fans recently. His daughter, Lori has been dating the popular Black Panther heartthrob for some time now. When asked what advice he would give Jordan, Harvey responded that the superstar actor was on his own.

“Really none. I mean I’m not going to help him,” he admitted.

“You know he’s going to have to earn it. I’m not gonna help him, so, but he’s a nice guy,” Harvey said. “He’s very respectful, family’s really great, he’s from a great family. I know his father personally. It’s going good for them. You know, relationships are hard, especially they, young and they’re in a Hollywood type relationship. I’m cheering for them.”

Maybe Jordan should read Harvey’s book or watch the films it has inspired.

It could be that Harvey is simply too busy with his television duties and radio show these days to offer some advice. The Black-owned entertainment recommendation platform PopViewers recently announced a collaboration with the comedian and Family Feud host. The app strives to make more diverse voices heard in entertainment. With ​​the two-time Daytime Emmy Award-winner for Outstanding Game Show Host and Outstanding Talk Show Host in is corner, PopViewers scored what could be a game-changing win.

“PopViewers is creating a more inclusive viewing experience and building a space which represents the voices and perspectives of viewers from diverse backgrounds,” said Harvey, according to Deadline.