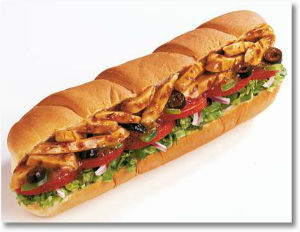 Subway has responded to claims that its “Footlong” subway sandwich is one inch too short by saying that “Footlong” is a name, not a measurement, Huffington Post reports.

Tuesday, teenager Matt Corby ordered a ‘Footlong’ sub from a Subway in Perth, Australia. Before eating the sub, he pulled out a tape measure and measured it, and discovered that his Footlong was 11 inches.

He posted a photo ofÂ  his measured sandwich to Subway Australia’s Facebook page with the message “subway pls respond.” The image got over 100,000 “Likes.”

On Wednesday, Subway Australia responded on its Facebook page, saying :

“With regards to the size of the bread and calling it a footlong, “SUBWAY FOOTLONG” is a registered trademark as a descriptive name for the sub sold in SubwayÂ® Restaurants and not intended to be a measurement of length.”