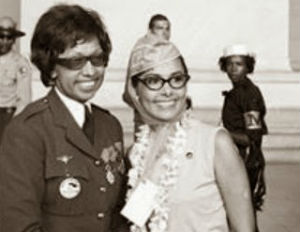 Josephine Baker with Lena Horne at The March on Washington.

Talented, beautiful, entertaining and inspiring. Those are just a few words used to describe all around entertainer Josephine Baker. But did you knowÂ the NAACP named May 20th after the performer? Josephine Baker worked with Dr. Martin Luther King Jr. to improve race relations by participating in demonstrations and by boycotting segregated clubs & venues.Â Her efforts during the civil rights era proved to be an invaluable asset in aiding the advancement of African Americans.

“When New York’s popular Stork Club refused her service, she engaged a head-on media battle with pro-segregation columnist Walter Winchell. The National Association for the Advancement of Colored People (NAACP) named May 20 Josephine Baker Day in honor of her efforts.”

While delving more into Josephine’s history, I discovered patterns of greatness that without aÂ doubt led her to massive success. In honor of Josephine Baker Day I share with you:Â Success Strategies of Josephine Baker.

1. She Trusted Her IntuitionÂ – Josephine Baker honed her craft by dancing in clubs and in street performances. When she peaked in the U.S., Josephine took a leap of faith and embarked on a new venture which landed her inÂ Europe, where she became an overnight sensation after her dazzling performance of ‘Danse Sauvage’ (Wild Dance). Â After the successful performance of ‘La Folie du Jour‘ – where the infamous “banana skirt” emerged,Â Josephine expanded her artistry by trying her hand at singing professionally. This bold move would later landÂ herÂ twoÂ film roles.

2. She Used Her Celebrity for Good – It’s been said that during the 1920’s Josephine Baker was one of the most photographed women in the world. In fact, many African Americans refer to Josephine as the ‘1st Black Female Celebrity.’ As she was the 1st black woman to star in a major motion picture!Â She used her celebrity toÂ bringÂ civil rights awareness to the spotlight, even using her children as a teaching lesson of sorts. Josephine adopted childrenÂ from all around the world and dubbed her kids theÂ ‘Experiment in Brotherhood,’ also known as her ‘Rainbow Tribe.’ Not only that, but she tended to invite people to her home to see her children, hoping that guests would take awayÂ that it was possible to live, love andÂ thrive with people of other races and nationalities.

“Let us stop saying ‘white Americans’ and ‘colored Americans,’ let us try once and for all saying… Americans. Let human beings be equal on Earth as in Heaven.” -Â Josephine Baker

3.Â Bravery Trumped It AllÂ – Maya Angelou once said that courage was the most important virtue, because without courage you cannot practice any other virtue. I like to think that Josephine Baker thought similarly. Seeing as she was a pioneer as far as black female celebrities are concerned. Watch her take one leap after another, satisfying her dreams of stardom and luxury.