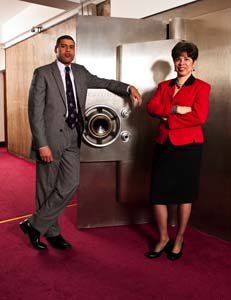 But that growth hasn’t been without its share of challenges, the most daunting of which came courtesy of a global financial crisis that left banks of all shapes and sizes scrambling to meet liquidity requirements and seeking government aid. “We didn’t think it would affect us as much as it did, but obviously that happened after September 2008, as panic went through Wall Street and the large banks,â€ says Mitchell. “We didn’t have any exposure to [mortgage-backed derivatives], but as the economy got worse it started to affect areas of our portfolio.â€

As unemployment rose, the team began to identify potentially troubled loans as quickly as possible to ensure that the bank had the proper reserves. They began reappraising property–since values declined so sharply– and took write-downs on properties that were underwater. To ensure that borrowers could keep making payments, they contacted them and renegotiated terms.

“We’re still attempting to do modifications for some of our borrowers and shore up where we can,â€ Mitchell says, “but we’ve made provisions for loan losses.â€ Funds that would have gone toward the bottom line were reallocated, and reserves for bad loans were increased to $2.5 million in 2009, $2.1 million in 2010, and are likely to reach $2 million for 2011. “That’s a lot of money, but fortunately we did it before the examiners made us do it.â€

But other measures needed to be taken as well. For example, vacant positions at the bank weren’t immediately filled. “We stopped officer bonuses, executive management bonuses.
We froze salaries for executive management,â€ says Mitchell, a graduate of Rutgers University. “We did everything we could to get through this. It didn’t feel good, but we have employees who understand that these are tough times.â€

Regulation Blues
While Industrial Bank deals with the after effects of the crisis, it must also contend with stricter regulation. Community banks have to comply with much of the regulation that’s aimed at curtailing the big banks that received bailout funds. But these smaller institutions, unlike the big banks, often struggle to secure the manpower and financial means they need to ensure compliance. As a result, Industrial is identifying new revenue lines.