Council Says Black Women Must Stand up for Susan Rice 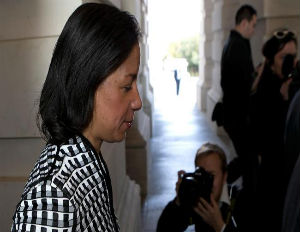 Dr. Avis A. Jones-DeWeever, Executive Director of the National Council of Negro Women penned an editorial at The Grio today asking all black women to stand up and defend the current Ambassador to the United Nations, Susan Rice, against recent verbal attacks from Republican Senators, particularly John McCain.

In the essay, Jones De-Weever writes that the “hoops” Susan Rice is being made to jump through in order to secure her nomination for Secretary of State “are hoops structured, designed, and maintained by the persistence of white male privilege in America. They serve as reminders that though a new and rising diverse electoral coalition is undoubtedly in play, the overall paradigm of power and privilege in this nation remains firmly within the grasp of white men.”

Jones De-Weever goes on to write: “there is no doubt, Ambassador Rice is someone of extraordinary intellect, ability, and qualifications and to suggest otherwise in such a crass and disrespectful way is not only an indicator of partisanship run amuck, it quite clearly reeks of not only racism, not only sexism, but in fact smacks of both.”

Read the entire essay at The Grio.