T. Boone Pickens Welcomes Dr. Dre to The 1 Percent With a Tweet 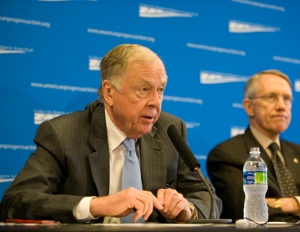 Business magnate T. Boone Pickens has donated over half a billion dollars to charities and his alma mater.

The tweet comes after news that Apple could be buying Beats Electronics from Dr. Dre and Interscope Records’ Jimmy Iovine for around $3.2 billion.

However, Pickens could have sent this tweet a lot earlier, considering Dr. Dre’s net worth.

According to Forbes, the West Coast rapper is worth more than $550 million thanks to both his music career and his ownership in Beats Electronics.

If Dr. Dre were to become rap’s first billionaire, it would make him even richer than Pickens himself, whose net worth was recently dropped to $950 million, which caused him to be removed from The Forbes 400 list of the wealthiest Americans.

T. Boone Pickens isn’t shy about tweeting, especially to rappers. Two years ago, the oil tycoon tweeted at Drake about the level of difficulty associated with amassing wealth.

The first billion is a helluva lot harder RT @Drake: The first million is the hardest.

@boonepickens just stunted on me heavy.