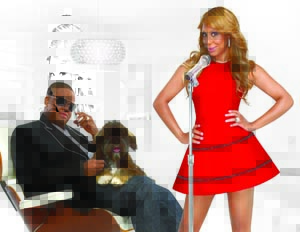 Everyone should know I’m a reality TV fanatic. And if you didn’t know, now you do. I watch everything from Celebrity Apprentice to Say Yes to the Dress to R&B Divas to Fish Tank Kings (a very interesting day-in-the-life show that follows aquarium entrepreneurs and their outrageously amazing creations.)

(Hold on reality TV haters and naysayers. I’m getting to a point worth reading soon.)

In a recent episode, Tamar was dramatically in her feelings about her album and why the first single wasn’t being pushed to the public yet. Vince kept urging her to wait, adding that proper positioning could mean the difference between a Top 40 hit or a barely downloaded flop. (And this is a man behind the success of platinum-selling stars including Toni Braxton, Lady Gaga and Mindless Behavior.)

I can understand Tamar’s yearning to finally grab the spotlight. She’s beautiful, has an awesome voice, and truth-be-told, she’s been in the business for more than a decade, with her eyes on the prize since her pre-teen days as a ‘do-wop-pop-pop’ girl. (Her words, not mine.) Her first album had nominal success, so I can totally understand her haste in capturing that second change at major stardom.

We’ve all had those moments where we want to rush to greatness, where we want that promotion, that big break, that moment to finally shine, and we want it not now, but yesterday. Early. We are so sure of ourselves and our hotness that we just want to bust out and let the world know today.

I’ve had many of those whiny, spoiled ‘Why not now’ career moments that I later learned just weren’t realistic or best at the time:

As a fresh implant to New York with her heart set on a Park Ave. apartment but her bank account set on a modest studio in Bedstuy…

I learned a great lesson about positioning and waiting my turn after what I deemed a major career disappointment: I didn’t get that major full-time job at that major newspaper, not because I didn’t have the potential or know-how, but the power moves just weren’t there. I had done very little to earn it. And on top of that, the timing wasn’t right.

I wouldn’t be in the awesome position I am now had that happened anyway. And I’m not too mad about that.Â Today, I still have those Tamar “now-now-now” moments. But, I’ve learned it’s best to really map out a plan, strategize, get out there, network, and build up an awesome track sheet so that when it’s time for the boss move of all boss moves, I’ve built a good foundation and network to sustain it. There’s a domino-effect of success I’d not like to disturb due to haste and bratty desire.

I’d challenge anybody who wants to rush to greatness—whether it’s that new product or concept, a position you feel you deserve or that dream business you want to start —to reconsider the urgency and get replace those anxious jitters with a solid, step-by-step plan that will ensure long-term, residual success, not just a short-sighted win.