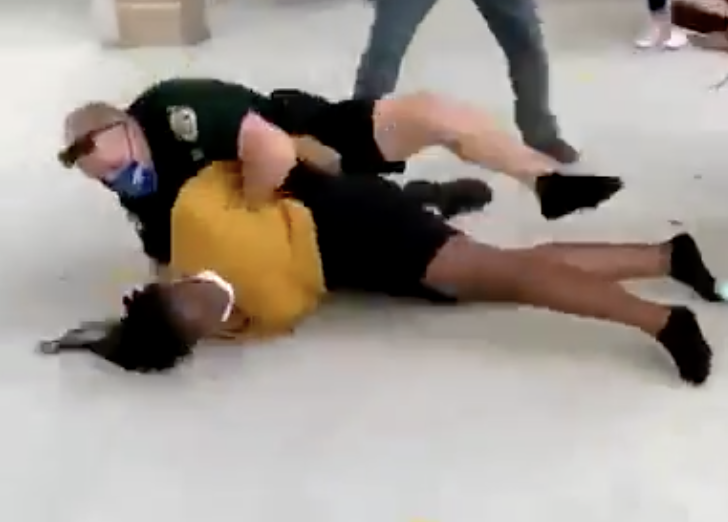 An Osceola County teen who was brutally slammed to the ground head first by a school resource officer is reportedly suffering from memory loss, insomnia and headaches, her family, said on Friday.

According to WFTV News, 16-year-old Taylor Bracey is still experiencing the effects of the injuries she sustained from Officer Ethan Fournier after allegedly using excessive force to break up a fight at Liberty High School Kissimmee, Florida, last week. The now-viral video captured Bracey appearing to lose consciousness after being thrown to the ground by the man. He proceeded to put her hands behind her back to handcuff her forcefully.

The @OsceolaSheriff is investigating what happened in this video. You see an SRO slam a student to the ground, appearing to knock her unconscious.

This happened today at Liberty HS in Kissimmee. The deputy was reportedly trying to break up a fight. pic.twitter.com/pEcyVtQ3p9

The video also shows students on the scene appearing to be in shock by the officer’s actions.

The young lady’s mother, Jamesha Bracey, told the news outlet that her daughter might have suffered permanent damage.

“She’s very traumatized at this moment,” her mother said. “(We’re) just angry and want justice to be served. She’s experiencing headaches, blurry vision, memory loss, having trouble sleeping on and off.”

Jamesha also spoke to WFTV about the altercation between her daughter and another girl expressing that it was not a physical fight.

“They had a verbal altercation. They never touched each other,” Jamesha explained. “They never fell, you know, before the police officer came and slammed her to the ground.”

The news outlet reported that Taylor had no recollection of Fournier slamming her. She just remembered waking up in the principal’s office. The video had already gone viral when she saw it for the first time on Thursday.

Crump spoke with WESH about the incident suggesting that Taylor’s race may have been a factor in Fournier’s aggressive approach to the teen. The teen is Black, and the officer is white.

“I am just angry that a trained professional, adult man feels that he has the right to pick up and slam a young Black girl,” Crump said.

“They don’t do this to other people’s children,” he continued. “Why do they feel like it’s OK to do it to our children?”

According to the Orlando Sentinel, the Bracey family, along with Crump, held a rally and news conference outside of the Osceola County Sheriff’s Department headquarters on Saturday.

Roughly 40 people attended the event, which called for justice for Taylor.

“When you watched that video, and you heard her head hit that concrete floor — and that thump,” Crump said, slamming his hand into the podium. “Who can say that they didn’t wonder whether that little girl was killed? Her body was limp. She was unconscious. Lifeless.”

The girl’s family is demanding that Fournier be fired for his actions and that the state revoke the law requiring armed police officers to be in every educational institution.

Fournier has been placed on paid leave while the Florida Department of Law Enforcement investigates the incident.