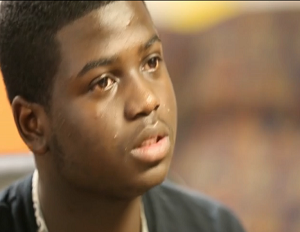 One Iowa mother is highly upset and rightfully so and she’s demanding proper action be taken against her son’s high school teacher who reportedly made her child call him “master.”

“I have tried to be humble,” Nicholle White tells The Des Moines Register. “But I also feel I need to express as a mother, and as a black woman, how I feel.”

White’s son, Jabre White of Roosevelt High School, says that when his teacher Shawn McCurtain told the students to go downstairs to take their final exam he responded, “Yes, sir.”

After the exchange was brought to White’s attention, she requested that school officials look into the incident and Vice Principal Joseph Blazevich investigated and confirmed that the comment was made. But despite confirmation of the comment, Des Moines school district spokesman Phil Roeder says that McCurtain is still employed by the district.

White says that she plans to contact the Iowa Civil Rights Commission and the NAACP about the matter as she feels the situation was handled too lightly.

With African Americans making up only 22% of Roosevelt’s student body, white students making up 54% of the population, and Hispanics 11%, it is our greatest hope that proper disciplinary actions are taken against McCurtain and any other school official whose mindset is still stuck in “slave America.”