Winging It: Technology, the Etiquette Killer 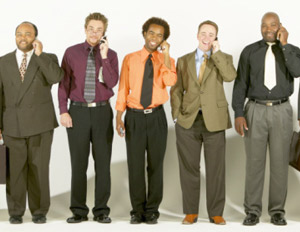 But today topped all: In crawling traffic, on the highway, a guy in a tan business suit was eating his breakfast, drinking his coffee, talking out loud (presumably on a call), and intermittently typing ON HIS LAPTOP… while driving!

If ever there was a corner of life where we are all winging it on a daily basis, it’s with technology. The gadgets we now use to organize ourselves and function daily are evolving so quickly that it’s impossible to keep up. And they’ve become so fully integrated into our lives that we’ve barely had a chance to realize what’s really working and what’s clearly not.

The race to stay current (which is as competitive among consumers as it is among the tech companies themselves) doesn’t help. Let’s face it, we’ve all ditched some tech toys long before even figuring out half of what they’re capable of, simply because the next best thing came out and we had to have it.

But in the process, what’s become of us? We want all the best technology has to offer, but do these gadgets bring out the best in us?

According to a recent survey, the answer is a quick, resounding, no. To the contrary, the latest report from the Pew Internet and American Life Project, indicates that the increase in use of mobile devices has led to a corresponding spike in PDT (public displays of technology), TMI (too much inappropriate information being shared via social media), and even DWT (death while texting).

None of this comes as a surprise to anyone, as we have all been in an elevator (or bathroom, restaurant or train) with someone who is carrying on a too long, too loud and often way too personal conversation on their cell phone. We’ve all gotten insipid emails forwarded to us, threatening repercussions from no less than God Almighty if we don’t keep the chain going. And no matter how many lives are lost, too many of us still risk life, limb, and driver’s licenses on the regular so we can text while driving.

What’s the problem? We know these things are wrong and in some cases even stupid or dangerous. Do we really need etiquette books to remind us that what we were taught as small children still applies when a cell phone or laptop is involved? Do we have to be bombarded by graphic public service campaigns designed to scare and embarrass us during Distracted Driving Awareness Month (April, in case you missed it) in order to realize what’s at stake when we’re behind the wheel?

Crackberry jokes aside, do we need 75% of hiring managers to verify the notion that technology breaches at work can kill a career? If so, consider yourself warned, because that’s precisely what a recent survey by the staffing firm Robert Half found.

The same survey revealed that 45% of executives multitask while on conference calls, causing them to be clueless about entire portions of meetings. Surveyed online, of course, they admitted that and more. One out of five confessed to frequently rude device-driven behavior; but they claimed to do it anyway. Why? Because everybody else does.

This monkey-see-monkey-do excuse is making apes out of all of us, from the bedroom to the boardroom. About 20 percent of adults now cop to checking their mobile devices just before closing their eyes at night and right after opening them each day, as in, before they even get out of bed! So much for nighttime prayers and morning salutations, or even a good night’s sleep. No wonder insomnia is also on the rise.

As for real life business apps, please. The workplace is rife with bad tech-behavior from folks who walk around the office with personal earpieces in (you are not in the Secret Service), to time-stealers who hit “reply allâ€ to every email, to phone exhibitionists who hit “speakerâ€ whenever they get a call, broadcasting their conversations with suppliers, clients, and their own children to everyone within earshot. And, for the record, texting, tweeting, Facebooking, and emailing in meetings only vastly reduces efficiency and promotes rudeness, yet it’s the norm wherever laptops and mobile devices are present. To believe otherwise is to be naÃ¯ve, at best.

Don’t get me wrong, I’m not suggesting that we ditch these devices. We all know there’s no going back. But unless we want to continue this downward spiral of tech-behavior, we have to check ourselves and stop believing that the tried and true rules of right and wrong don’t apply. They do.

The devices are not the problem. We are the problem, and we can just as easily be the solution. So, when it comes to getting your tech on, be considerate (as in mindful of others). Be respectful (of people’s time, talents, and resources). Be polite (the “magic wordsâ€ still matter). Be smart (no, it is NOT okay to forward a dirty joke to your boss, post revealing photos of yourself or others on your Facebook page, or Tweet that your assistant’s breath is nasty). Just please, be more conscious and behave with greater care.