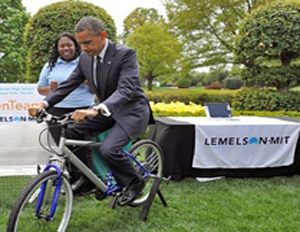 When did you realize you were passionate about STEM?

Elliot: I think I speak for the both of us when I say that we were interested in the field of science after we joined our teacher science research class, which most of our teammates were members of the class.Â  So I started my sophomore year, and I was able to conduct an independent research project. After that year I didn’t win anything, or do that well at regionals, but I fell in love with the whole process of having a problem and then trying to solve that problem–and making new discoveries in the field of science.Â  From there I conducted three different research projects and I really fell in love with the field of science.

Karr: I started research as a class in my freshman year in high school. Before that I had really liked science. Once I actually took the class and got to have my own independent project, and solved those problems, it really made it that much more interesting that I could study something that I was really interested in instead of just something that the teacher gave you.Â  That’s when my interest in science started.

Why do you feel it’s so important for young people to get involved in STEM?

Elliot: I think it’s important for young people to be involved in STEM, not because [of] the fact that it’s going to be where all the jobs come from in the future, but because it’s where all the solutions for all the problems in the world are going to come from.Â  We need people who are going into the sci and the technological fields, and focus on problems in the world right now that they could use science to solve. I think that if more young people were involved in STEM, then I just think that there would be a better future because more solutions to different problems would be created.

Where do you see yourself in five years?

Elliot: I see myself working in environmental science and just using my research to solve other environmental issues in the world. Â Whether it’s the lack of food that people have or the lack of clean water in the world, I really think that our main concern for the world right now is the environment. I’d like to help come up with solutions to make sure that everything is sustainable for the future.

Karr: In the next five years, I see myself in school still. After that, I would really hope to join a non-profit organization such as Peace Corps or Doctors Without Borders, or something where I can travel around to help other people when I am a doctor.

Check BlackEnterprise.com/Technology for more features on teens in tech.