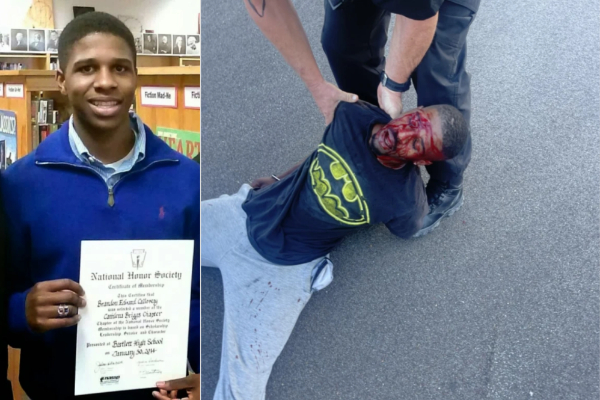 Police in Oakland, Tennessee, are under investigation for the aggressive arrest of a Black Door Dash driver who was beaten inside his own home after a traffic stop went wrong.

The Tennessee Bureau of Investigation launched an investigation into the now-viral footage showing Brandon Calloway’s violent arrest on Saturday, July 16, WREG reported. Police claim they tried pulling Calloway over for a traffic stop but he refused to pull over.

The 2021 UT Chattanooga graduate allegedly failed to stop for a stop sign and was going 32 miles per hour in a 20 M.PH. zone, police say. That’s when they ended up following him to his father’s home where things escalated.

Cops say they were forced to kick down the door to gain entry and had to use a taser and baton to detain Calloway.

A viral tweet of the arrest indicates that Calloway was racially profiled.

An affidavit from police claims that when they arrived at Calloway’s home, he came outside with two people “being aggressive,” Fox 13 Memphis reports. Video of the arrest, shot by Calloway’s girlfriend, shows another woman pulling her away from an argument with an officer.

A second video shows officers charging into the family home of Calloway. You see them chase Calloway into an upstairs room, where he hid behind a couch before officers begin tasing him.

Cops claim the taser had no effect on Calloway and they had to use the baton on him instead. Once on the ground, Calloway’s lawyer, Andre Wharton, says one of the officers put a foot on his neck area.

“In this video, you can see in the house when force is being exerted, one of the officers, I believe to be one of the white males, you’ll have to verify for yourself, is putting his foot on the head area, the neck of Brandon Calloway,” Wharton said.

Fayette County District Attorney Mark Davidson has since asked the Tennessee Bureau of Investigation to investigate Calloway’s arrest and the use of force involved.