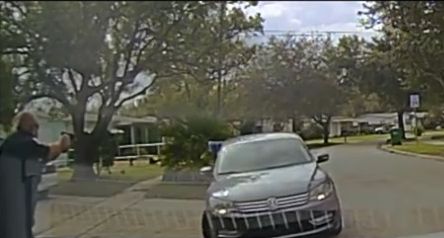 Questions are surrounding a case in Florida where two Black teenagers were killed by a police officer and the killings were caught on camera. Last Friday, according to CBS, two Black teenagers were killed when a sheriff’s deputy fired into the car as they were driving. Their families want more details about what actually happened and why the police had to use deadly force.

The two dead teenagers, 16-year-old A.J. Crooms and 18-year-old Sincere Pierce, had been followed by Cocoa, Florida, police officers who claim they were investigating a stolen car. The officers pulled behind the vehicle and made the boys stop in a residential neighborhood. A dashcam video, which was released Tuesday, shows two police vehicles following them. As the car turns around, one of the deputies yells at the driver to stop the car. When he doesn’t, deputy Jafet Santiago-Miranda fires directly into the vehicle, killing both occupants.

The Brevard County Sheriff’s Office of Florida posted the video and a statement on its Facebook page.

“What we know to date is that on Friday morning two of our Deputies were attempting to conduct a follow-up investigation on what they believed was a possible stolen car that had just recently fled from another Deputy in the Cocoa area.

“The vehicle in question was first observed at Clearlake and Dixon, then moments later in the area of Ivy St. in Cocoa at which time the two Deputies observed it making a left hand turn onto Stetson and immediately into the driveway of a nearby residence.
“At this point the Deputies exited their vehicles in an attempt to make contact with the occupants, however, as you will see in the attached in-car camera video, the driver of the vehicle backed out of the driveway and turned toward the Deputies and their vehicles that were parked in the roadway.
“As you can clearly hear and see on the video recording, Deputy Santiago-Miranda gives repeated verbal commands, seven to be exact, for the driver of the vehicle to stop the car, however, the driver of the vehicle, 16-year-old Angelo Crooms turns and accelerates the vehicle towards Deputy Santiago-Miranda who was then forced to fire his service weapon in an attempt to stop the deadly threat of the car from crashing into him.”
According to the sheriff’s office, there was another passenger in the car who “provided a thorough statement to FDLE that confirms the occupants of the vehicle heard the verbal commands of the Deputy and that Crooms still turned the vehicle and accelerated.”
Civil rights attorney Ben Crump posted the video to his Twitter page.

Video released by @BrevardSheriff clearly shows AJ Crooms & Sincere Pierce were terrified, trying to drive around cops who approached w/ guns drawn. Out of harm’s way, the deputy moved closer to get a better shot, firing w/ intent to kill, then kept firing as the car passed by. pic.twitter.com/9RrAmLKqyT