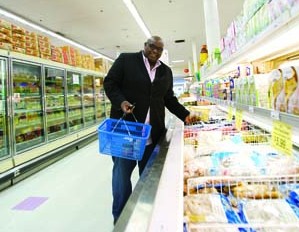 Curtiss Pope’s bright idea came to him while shopping in his local Safeway grocery store, filling a cart with food and other items for a party. “My wife and I were scrambling to find everything on our shopping list,â€ recalls Pope, 30, founder of AisleFinder in Silicon Valley. “As we plowed through the task, the idea of developing technology that would help people navigate the grocery store hit me like a lightning bolt.â€

After some research revealed that no such product was on the market–and armed with years of experience as a software developer and designer–Pope set up a prototype for a website and mobile application that would help shoppers create a digital shopping list, select their target store(s), and find those grocery items in the selected establishment. The information can be printed out or delivered to a mobile phone for use while shopping.

Next, Pope involved retailers and food manufacturers in the project. Funding the initiative with his own “sweat and money,â€ he built relationships with Safeway Inc., PepsiCo Inc., and Supervalu Inc. Safeway was the first retailer to buy into AisleFinder’s concept. Currently available for more than 3,000 supermarkets in the U.S. and Canada, AisleFinder is “like a GPS for a grocery store,â€ according to Pope.

Creating those ties wasn’t easy, but the work he did before getting in front of those large corporations paid off. To develop those retailer maps, AisleFinder relies on a 100-person team of independent contractors working in an offshore call center retrieving data and building relationships with the stores. While Skyping online with store managers and employees, contractors can gather the data needed to create an AisleFinder map for an establishment within five minutes.

“Whether you’re organizing a big event or just shopping for a group lunch, having the AisleFinder app at your fingertips shaves significant time off of the shopping process,â€ says AisleFinder user Amdue Torres, a computer analyst and frequent community volunteer in Richmond, Virginia. “Using it should be a requirement for anyone who has to hit the grocery store as part of his or her job, and for those who volunteer a lot.â€

AisleFinder runs on a technology platform that Pope built from scratch. Critical components include a structured query language (SQL) database; an iPhone app that was built with HTML5 and CSS3; and a website architected with Microsoft ASP.Net. “Since I came into this knowing software design, I did it all myself,â€ says Pope, who is now looking to hire more staff to handle some of the ongoing Web development and maintenance tasks. “I’d like to free myself to work on more strategic projects in 2012.â€