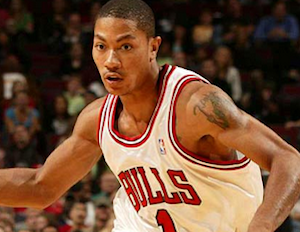 Derrick Rose became the first guard to be drafted by the Chicago Bulls, the first overall draft pick in the NBA since Allen Iverson in 1996. Rose was named the league’s MVP in 2011, the youngest player at age 22 to ever win the award. He was also the first Bulls draftee to score 10 points or higher in his first 10 games since Michael Jordan. In 2010, ESPN reported that Rose had the fourth best-selling jersey in the league. He signed a five-year contract for $94.8 million with the Bulls in December 2011. Despite his continual knee injuries, the star manages to persevere and rule the court.