'The Path Of Least Resistance' Brought Dollie S. Bishop To a Pioneering Role In The Podcasting Industry 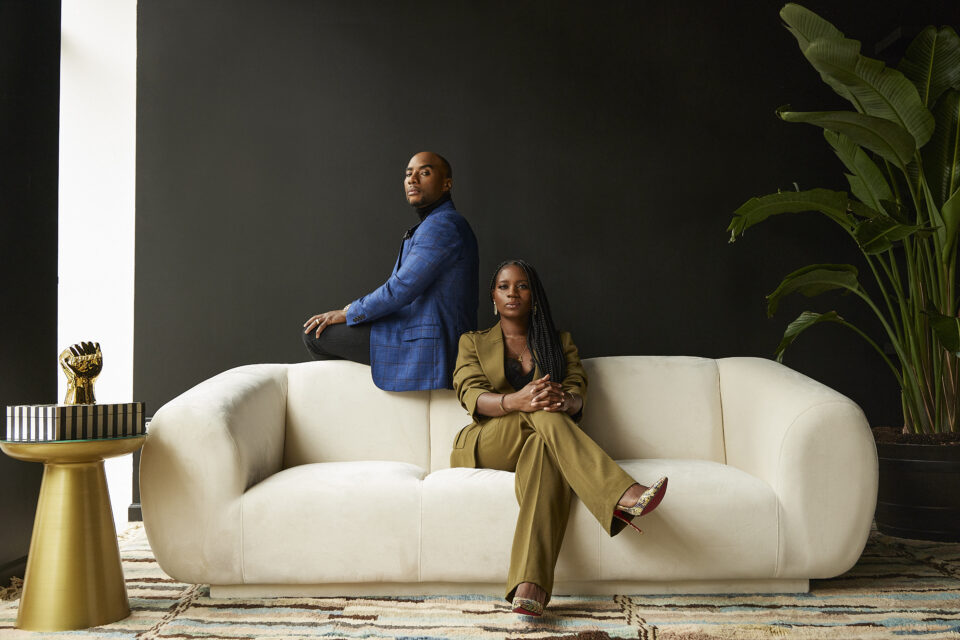 At the height of the pandemic, Dollie S. Bishop got the type of phone call that exemplifies the adage, “If you stay ready, you don’t have to get ready.”

“I’m very much into self-help content, so I would listen to podcasts,” she tells BLACK ENTERPRISE. “I would listen to Oprah’s SuperSoul Conversations or big podcasts like The 1619 Project, miniseries—I would jump in and out of those. But no, podcasting wasn’t on my radar at all.”

By that point in her career, Bishop had been exposed to various facets in the world of entertainment, having started with an internship at Def Jam and then transitioning into film and television production after a long stint working alongside Nick Cannon on various projects. Then came the fateful call from Charlamagne Tha God, who she refers to as family.

“He just called me out of the blue and was like, ‘I have this opportunity’,” she recounts. “I didn’t even know he was working with iHeart to build a podcast network, but he asked, ‘Would you like to run it?’ And I could only believe at that moment the universe said, “Yeah, you know you’re ready. This is why the opportunity’s here.”

The Black Effect Podcast Network has become one of the most impactful entities in the ever-expanding podcasting industry within its first year of business. Created expressly to foster conversations around social justice, pop culture, sports, mental health, news, comedy, and more and led by some of the most prominent voices in Black culture, the network had secured over 147 million downloads in less than a year.

All of which makes Bishop, Black Effect’s president of Production and Creative Development, one of the most impactful influential Black women in the podcasting world. And undeniably, one of the busiest execs in her new sphere. Working in tandem with Charlamagne, with whom she says she is in constant communication daily, she manages an all-Black team of 11 internal employees.

“I’m as hands-on as needed,” she says of her involvement with the 28 shows currently streaming through the network. “And I feel like I’m hands-on a lot because I’m in constant communication with our partners; there’s always a direct line of communication from me to them, from them to me.”

Supporting Bishop in her day-to-day functions is Director of Production, Shanelle Collins, who oversees the seven producers who are directly responsible for the execution of each show. Additionally, Black Effect’s internal staff consists of executives responsible for marketing, talent relations, and talent booking. And the all-Black staff is supported by iHeart’s team as well.

“The Black Effect is a standalone company,” she says, explaining the unique partnership between the two brands. “So, we’ve had the freedom to do as we’d like and set up the business practice as we like. But iHeart is No.1 in podcasting. They’ve been very successful in this medium. And within our first year, it only made sense to follow suit and adopt a lot of [their] business aspects into what we’re doing at The Black Effect. It seemed only smart to understand, learn, figure out and follow suit what IHeart has been doing to bring the success that they have right now.”

Now, home to some of the most popular urban podcast titles—including The Breakfast Club; the popular hip-hop mainstay, Drink Champs; Matt Barnes and Stephen Jackson’s All The Smoke, and the hugely popular 85 South podcast—it’s easy to forget this entire company came into existence six months into a global pandemic; at a time when the entertainment industry stood in limbo and media companies were shuttering and downsizing left and right.

“We would probably have to knock on Charlamagne’s brain to figure out how it all came together six months into the pandemic,” Bishop jokes. “I’m just grateful that he trusted me and my capabilities.”

The first month was chaotic, especially for Bishop, who found herself not only learning a whole new facet of the world of production but also hiring new staff members, fielding pitches for new content, executing contracts with new partners, and talking with execs at iHeart about organically scaling the new entity.

Like many startups, what has been key in The Black Effect’s success is strong communication. Despite being all remote, Bishop has fostered and encouraged a close relationship between all members of her team. That openness, she says,  made it easy to keep the work flowing, keep everyone motivated, and maintain productivity, even though much of the staff didn’t meet in person until September of this year, when The Black Effect Network celebrated its first anniversary in Atlanta, with a live taping of 85 South.

As The Black Effect Network forges into its second year of business, Bishop says the goal is to continue amplifying Black voices everywhere, with a production team that reflects the diversity of talent. Already, the network has introduced 15 women-led podcasts into a space that was once 80% white, male-occupied. The top of 2022 will see the network add new titles featuring journalist Zuri Hall, radio vet Devi Brown, and comedian Jess Hilarious.

In many ways, the platform’s growth is informed by Charlamagne’s evolution, which Bishop says has been phenomenal in her years knowing him.

“If you know a little bit about his background growing up in South Carolina and having had run-ins with the law, I think he surpassed all expectations,” Bishop says. “He’s the epitome of, ‘Look what I can do, take a look in the mirror and look at what you can do right now.’ And I think he does that, and effortlessly. I don’t even think he’s consciously trying to. I think that he’s just living in his purpose. He’s doing as he’s supposed to.

“I feel like he’s returned to himself, and he knows exactly who he is,” she continues. “I think his evolution speaks volumes not only to who we are as a people and how people perceive us; but to Black men in general and how people limit their capabilities and their existence to who they think that they want to minimize them to be. I think he’s surpassed all of that.”

Bishop on Breaking Barriers to Build a Brand

As for Bishop, she’s stepping into year two with the same attitude she had walking into year one. Because what she found most helpful in navigating this unprecedented challenging first year in a brand new field was that she is “always on time.”

“It was a huge learning curve for sure,” she says. “I learned a hell of a lot about myself. I learned a hell of a lot about how to respond when I’m responding to things. And I learned a lot about patience and being in the moment; I think that’s the biggest thing I’ve taken from the first month of learning podcasting and being in this. I like to take the path of least resistance, and I go wherever the universe whisks me. That’s why I feel like I ended up in podcasting: I assumed that was part of my journey.

“The most helpful thing I [try to] remember is that I was right where I was supposed to be,” she adds as a bit of wisdom for anyone navigating a career. “I’m always on time. I think we all are guided. It’s just how much we pay attention to the guidance that’s given. You’re right where you’re supposed to be. You can perform. And you’re more than capable. I mean [otherwise], this opportunity wouldn’t be in front of you.”