The Power of the Purse and the Polls

While Rev. Jesse Jackson Sr., challenged corporate America once again to level the racial playing field when it comes to consumers, workers, and entrepreneurs at the 19th Annual Rainbow PUSH Wall Street Project Summit in New York this week, he also spoke to BlackEnterprise.com about how important it is right now for individuals, and the black community as a whole, to harness the power we already have.

“We’ve given away power by voting less than we have and spending more than we have.Â  That’s a suicidal formula,â€ says Rev. Jackson. “You must spend less than you make and vote as much as you can. That’s the right combination. Much of our middle class is a spending middle class. We over-extend ourselves. We don’t see the value of investing and saving and getting returns. We must harness our potential, and leverage it,â€ he adds.

Cheryl Pearson-McNeil, Nielsen’s senior vice president of U.S. Strategic Community Alliances and Consumer Engagement points out that black households, particularly those earning $100,000 or more are the fastest growing income groups in the country, and that the community can leverage those dollars to bring about socioeconomic change. 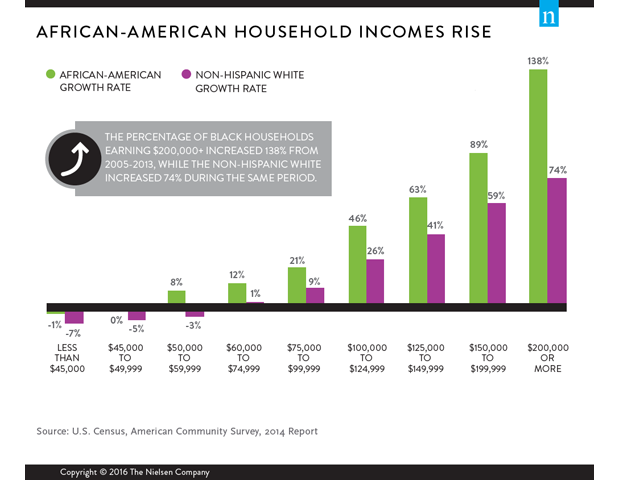 “Seventy-three percent of the Caucasian population and 67% of the Hispanic population think that blacks strongly influence pop culture. We need to ensure that the decisions that we make is reflected in our spending behavior and our viewing and purchasing habits.â€

Pearson-McNeil adds that blacks need to stop focusing on being on the losing side of the wealth gap, because we begin to expect that from other communities and ourselves. She says we should think of these five questions before we spend in order to actualize the positive side of our economic circumstances and give black businesses a fighting chance.

“Question 5 pushes people out of their comfort zone. You can’t sit around and complain if you’re not going to do something. Are you going to do it when you’re alone in your own home? It takes a personal commitment and it’s not easy.â€