The Richest People of All Time From Every State [Infographic] 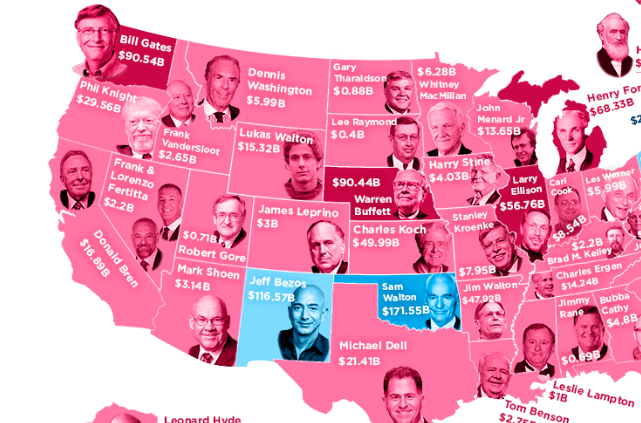 Every state in the union has produced some of the most wildly successful people on the planet—living and dead. A new infographic from How Much, a cost information website, maps the richest people of all time from every state.

The below excerpt is re-published with permission from How Much:

Mapping the Richest People of All Time from Every State

The U.S. is home to more billionaires than any other country in the world, but you might be surprised to learn that there are 7 states that haven’t produced a single billionaire. In fact, ranking the richest people of all time from every state reveals extremely wide differences in wealth.

How do you figure out the net worth of the richest individual of all time? We found our data thanks to Forbes, which did much of the number crunching for us. A lot of the richest people ever have long since died, meaning we had to adjust numbers for inflation to fairly compare it to today. We then color-coded each state to represent the range of its most successful citizen, and we added a picture of the millionaire or billionaire in question.

Top 10 States with the Wealthiest People of all Time

Our map reveals several interesting trends about the richest person from every state. First off, almost every person on the map is a man, although there are a few exceptions. Anita Zucker is the wealthiest of the 3 women with a personal fortune of $3.83B. At the very upper end of the spectrum, only four people cross the $100B mark, with nobody coming anywhere close to John D. Rockefeller at the very top ($257.25B). That’s the kind of money that lets you establish permanent multi-generational foundations long into the future.