The Root Hosts â€˜March on Twitterâ€™ 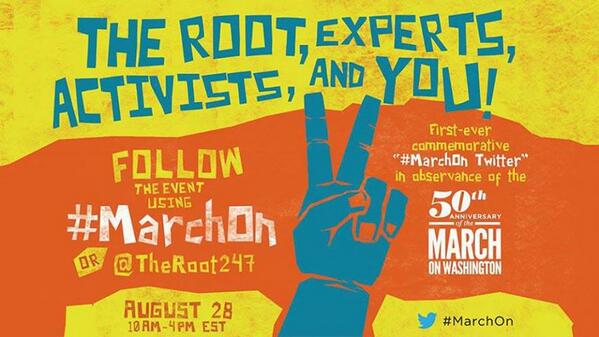 Fifty years ago Wednesday, an estimated quarter-million people descended upon Washington, DC to rally for equal rights for African Americans. It was there that civil rights pioneer Dr. Martin Luther King, Jr. delivered his historic “I Have a Dreamâ€ speech in front of the Lincoln Memorial, calling for greater equality for all.

In the age of technology, many movements are ignited and supported online, namely through social media. The Root is tapping into that viral vigor with the launch of #MarchOn Twitter, a full-day digital forum on the popular social networking site commemorating the 50th anniversary of the March onÂ Washington.Â  From 11am to 4pm EST, The Root will discuss many of the issues affecting the African-American community today such as the existing racial disparities in the criminal justice system and greater support for students of color within education, among other hot button topics. The hour-long segments, which will be live streamed on TheRoot.com, will all lead up to President Obama’s speech taking place at the same spot King stood decades before.

“We think this is providing a platform for individuals to learn about the specifics around some of these topics, to engage them in conversation about what is going on and, finally, provide resources for them if they want to continue to follow up on these issues,â€ said Donna Byrd, publisher at The Root, to BlackEnterprise.com. ” If they want to get engaged in their communities, we’ll provide tools for them to do that.â€

Led by The Root and a team o f experts and activists, the #MarchOn Twitter is expected to have a strong turn out.

“This first of its kind event will advance the civil rights conversation and social justice agenda that Martin Luther King Jr. and others helped to push to the forefront of American society 50 years ago,â€ said The Root in a press statement.