The Weekend Update: Full of Pride 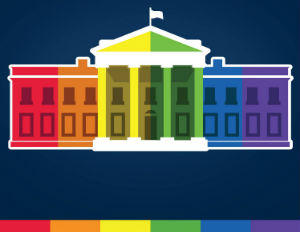 Following a landmark Supreme Court decision handed down Friday – which declared same-sex marriage bans violate the Constitution’s equal protection clause, and ultimately making same-sex marriage legal across the United States, previously planned LGBT Pride events around the nation erupted over the weekend. In New York City, home of the recently landmarked Stonewall Inn, millions attended the city’s massive parade through midtown and down into Chelsea and the West Village neighborhoods. In addition to walking in the parade with his family, New York Governor Andrew Cuomo officiated his first same-sex marriage in front of Stonewall Inn to kick things off.

“This is a proud day for America because it stands up to one of the principles that makes America so special,” Cuomo said. “It says, ‘today we treat equal people, equally’, and that really is the fundamental promise of this country.”

In San Francisco, over a million people showed up to the parade, which featured the recently crowned NBA champion Golden States Warriors team president Rick Welts as the Celebrity Grand Marshal. In Chicago, the NHL Stanley Cup attended the festivities with over a million other parade watchers. In an interview with a local publication, NHL champion Chicago Blackhawks team president Andrew Sobotka said, “It’s also important to have The Cup there because it’s an exciting time for the city, and it should be celebrated by everyone.”

The manhunt for the two escaped killers that were at large for nearly a month, has finally come to an end following the confirmed capture of David Sweat yesterday, who suffered two gunshot wounds to the torso, after police found him in the town of Constable, only 2 miles from the Canadian border. On June 6th at an upstate New York prison, it was discovered that the two convicted killers – Richard Matt, 48, and David Sweat, 35 – had escaped after reportedly using power tools to cut holes in the backs of their cells. The tools had been provided by a corrections officer within the prison, that smuggled them into the facility and to the prisoners inside of ground beef.

The first prisoner, Richard Matt, was accounted for on June 26th, after a U.S. Customs and Border patrol tactical team shot and killed him in a wooded area south of the town of Malone, also near the Canadian border.

Yesterday, BET celebrated the 15th anniversary of their televised awards show, The BET Awards. The who’s who of black celebrity descended upon the Microsoft Theatre for a memorable night, hosted by the stars of the sitcom ‘Blackish’, Tracee Ellis Ross and Anthony Anderson. The show featured memorable performances from Nicki Minaj and Chris Brown, who also led the nominations with six each, as well as a riotous introductory sequence from Kendrick Lamar, and a Janet Jackson tribute performed by Tinashe, Jason Derulo, and Ciara. Another big moment of the show came courtesy of Diddy and his Bad Boy crew when they reunited on stage bringing out Faith Evans, Ma$e, Lil’ Kim, and others. The big winners of the evening were Beyonce – who took home three awards including ‘Video of the Year’ and ‘Best Female R&B/Pop Artist’ and Chris Brown who also took home three awards including the ‘Best Male R&B/Pop Artist’ and the ‘Fandemonium’ award.